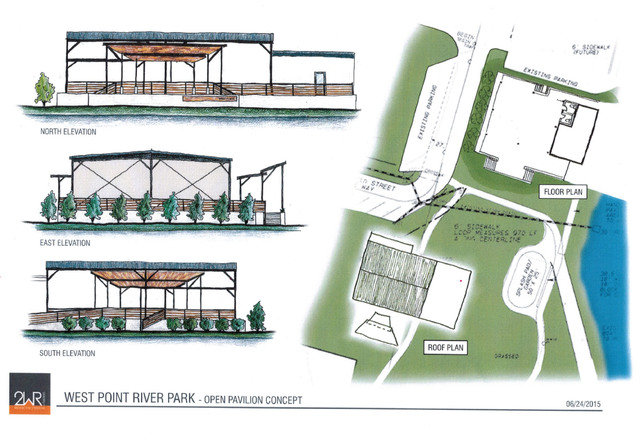 Crews work to install the groundwork for West Point’s Downtown River Park. The City Council discussed the park’s concept during a work session meeting on Thursday. According to the concept drawings, the park will feature a lighted, multi-colored splash park.

http://lagrangenews.com/wp-content/uploads/sites/37/2015/07/web1_WEB0712RiverPark12.jpgCrews work to install the groundwork for West Point’s Downtown River Park. The City Council discussed the park’s concept during a work session meeting on Thursday. According to the concept drawings, the park will feature a lighted, multi-colored splash park. A concept drawing handed out during a West Point City Council meeting Thursday shows plans to transform the former West Point Fire Department building into a pavilion for the planned River Park.

City Council members during a work session Thursday reviewed concept drawings for the park, which focused on the implementation of a splash pad. Council members also discussed a bid for construction of the splash pad submitted by Aqua Dynamics Inc. based in Jonesboro.

The concept drawings show the splash pad being placed next to a walkway near the Chattahoochee River. The walkway will extend around the circumference of the park and officials plan to include park benches for seating along the edge of the walking path.

“We will leave the existing ramp open for people to put kayaks and canoes into the river,” said City Manager Ed Moon.

Aqua Dynamics specializes in the construction and installation of fountains and various kinds of water features. According to the bid, the splash pad will cost $75,325 to build and install the fountain components that accompany the design.

Funds for the construction of the Downtown River Park were donated from Hyundai Dymos.

The splash pad will not only be intended for people to cool down during hot summer days, it will also be equipped with a lighting system that will accompany the water jets.

“A splash pad has been a topic of discussion among people in our community for a while now,” said Mayor Drew Ferguson. “Something like that would be a great attraction for our people to come and enjoy.”

City officials plan to renovate the old fire station in order to accommodate for public restrooms and shelter.