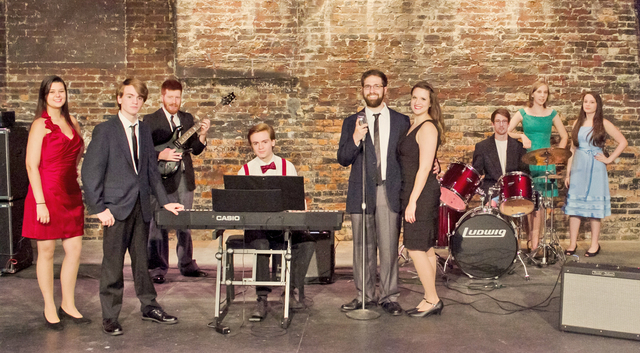 Taking place at the newly renovated New Horizon Theatre, “Downtown Sounds” will highlight well-known songs from the 1950s to present day. The concert features nine singers and six band members, many of whom were cast members in the musical “Smokey Joe’s Cafe.”

This year, four graduating seniors were presented with the Cliff Glover Drama Scholarship and over 40 scholarships have been distributed by the theatre in past years. Lynsay Summers and Matt Oleson coordinated the event with fellow cast members.

“We received such good reviews from ‘Smokey Joe’s Cafe’ that we thought a concert, with a similar theme, would be a good chance to raise money for the theatre,” Summers said. “The money raised will go towards New Horizon’s scholarship program. Every year, the board at New Horizon gives out scholarships to deserving high school seniors and we are very happy to give to those who deserve it.”

The cast hopes to show their gratitude for the theater by helping to support its young performers.

“We really have a good group of talent in the New Horizon family,” Oleson said. “Having the opportunity to perform with each other is something we all enjoy. We really appreciate all the theatre affords to us as performers, so doing a fundraiser show for New Horizon was something we all were on board with. We are so excited to see how it all comes together and we hope the theater benefits greatly from it.”

Show times are Friday at 8 p.m. and July 18 at 2 and 8 p.m. Tickets will be available at the door for $10 and all seats are general admission.

This report contributed from a press release submitted on behalf of New Horizon Community Theatre.