Local teams will face off in final four 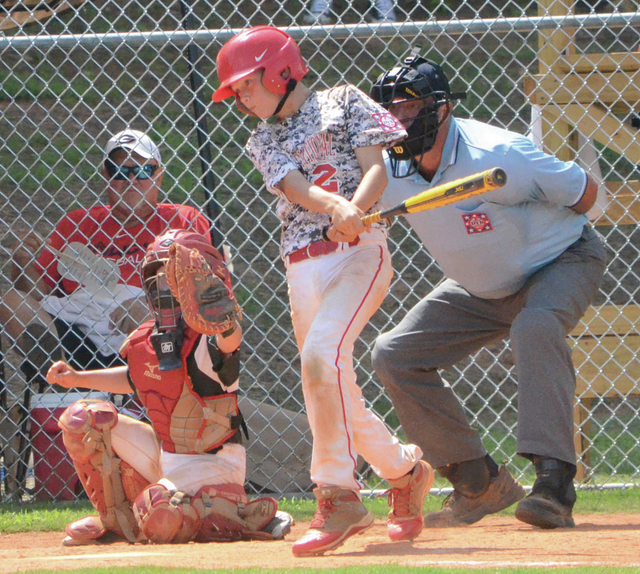 After playing two thrilling games in the district tournament, Troup National and Hogansville will face off in the semifinals of the 11-12-year-old Dixie Youth Baseball state tournament this weekend.

The state tournament began with eight teams, and the field was cut in half after the games on Friday and Saturday.

The eight teams were divided into two four-team pools, and a team needed to finish second or higher in its pool to advance.

Hogansville won its pool with a 3-0 record, while Troup National rebounded from a loss in its opener to go 2-1 and finish second in its pool.

Hogansville won both games against Troup National in the district tournament, and the two games were decided by a total of three runs.

It will be a double-elimination format next weekend, so no matter what happens when Hogansville and Troup National play, both teams will still be alive.

The state champion will advance to the Dixie Youth Baseball World Series.

Hogansville, after going 3-0 in the district tournament, is now 6-0 in tournament play after beating each of the teams in its pool.

Hogansville opened with a 10-0 victory over Miller County on Friday, and it beat West Augusta 13-3 later in the day.

In the final game of pool play, Hogansville beat Norcross 12-2.

Troup National’s state run began with a 3-1 loss to Albany, but it bounced back to beat Buford 9-1.

Needing a win on Saturday to advance, Troup National thumped Wrens 11-3 to secure its semifinal berth.

In the Wrens game, Colton Webb started and pitched four innings to get the win, and Justin Truett and Dawson Wright finished things off on the mound.

Caleb Deavers had a monster day at the plate with two home runs, three hits and seven RBIs.

Kade Rogers also hit a home run for Hogansville and he knocked in two runs.

Webb had four hits and an RBI, Wright had three hits, and Trey Hartley had one RBI.

Troup National did all of its scoring early, with three runs in the first inning and six more in the second.

Against Albany, Webb, Truett and Wright combined to strike out 10 batters while giving up just three hits, but Troup National couldn’t get much going offensively and lost 3-1.

Hogansville didn’t have much suspense in its games.

In its tournament finale, a 12-2 victory over Norcross, Zack Thompson pitched a four-inning complete game, and Demetrius Coleman drove the ball over the fence for a home run.

Hogansville scored nine of its runs in the second inning.

Thompson, Nathan Karvelas, Will Alford, Jacob Karvelas, Nate Lee, Ben Alford, Jalen Mitchell, Austin Tigner all reached base with a hit or a walk and scored runs in the inning, and Coleman hit his home run in the inning.

In the 13-3 win over West Augusta, Nathan Karvelas pitched all four innings to get the win.

In the seven-run first inning, Lee hit a home run, and Chase Williams, Thompson, Will Alford, Carson Garner, Coleman and Jacob Karvelas each reached base and came around to score.

In the six-run inning, it was Williams, Thompson, Will Alford, Garner, Coleman and Jacob Karvelas scoring the runs.

In Hogansville’s tournament opener, a 10-0 win over Miller County, Williams and Lee both hit home runs, and Coleman was the winning pitcher.