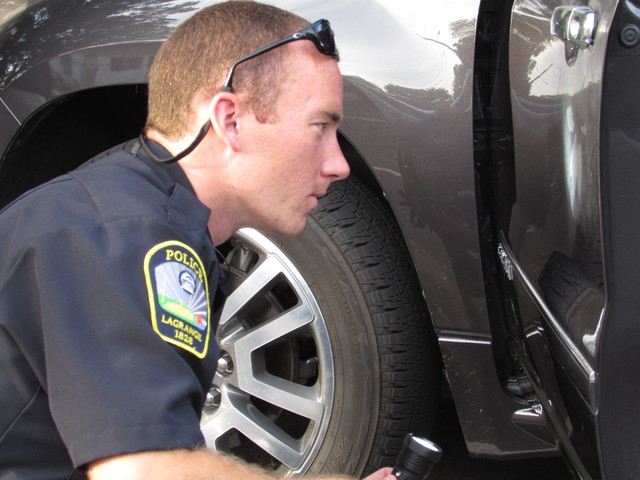 http://lagrangenews.com/wp-content/uploads/sites/37/2015/07/web1_WEB0713recruit11.jpgOfficer Bryan Reynolds, a new patrol officer with the LaGrange Police Department, dusts for fingerprints on the side of an SUV from which a thief stole a purse, a call he responded to during his first solo shift. Reynolds was an officer with the Columbus Police Department for three years, but returned to his hometown as a patrol officer when a position opened up at LPD. Officer Bryan Reynolds, a new patrol officer with the LaGrange Police Department, stops to help a woman stranded in the middle of the road because her car won’t start. Reynolds said he looks forward to being proactive in the community while on patrol and making a positive impact on people.

http://lagrangenews.com/wp-content/uploads/sites/37/2015/07/web1_WEB0713recruit31.jpgOfficer Bryan Reynolds, a new patrol officer with the LaGrange Police Department, stops to help a woman stranded in the middle of the road because her car won’t start. Reynolds said he looks forward to being proactive in the community while on patrol and making a positive impact on people. Officer Bryan Reynolds, a new patrol officer with the LaGrange Police Department, checks an SUV from which a thief stole a purse, a call he responded to during his first solo shift. Eventually, he hopes to become a part of LPD’s Crime Suppression Unit.

http://lagrangenews.com/wp-content/uploads/sites/37/2015/07/web1_WEB0713recruit21.jpgOfficer Bryan Reynolds, a new patrol officer with the LaGrange Police Department, checks an SUV from which a thief stole a purse, a call he responded to during his first solo shift. Eventually, he hopes to become a part of LPD’s Crime Suppression Unit.

LaGRANGE — Officer Bryan Reynolds is no stranger to fighting crime.

“I grew up here. To come back and make this community desirable and great is what I look forward to, plus helping people,” Reynolds said.

New recruits typically go through 11 weeks of training at the police academy in Columbus. Since Reynolds already had experience as an officer in Georgia for three years, he was allowed to skip the academy, but still went through two weeks of orientation at LPD’s training academy.

“It covers everything from self-defense to state laws, which dictates how we do our jobs,” Reynolds explained. “We talk about ethics and use of force … search and seizure … when you can arrest someone … search someone … seize something, there’s a lot of factors to consider in what you can and can’t do.”

Reynolds then completed 30 days of training with a LPD Field Training Officer, where he learned the computer and camera systems, plus LPD policies and procedures, among other things.

“It’s different from one agency to another,” Reynolds explained. “I’m also having to learn all the roads. This agency doesn’t have a mapping system (in the car) … so just getting to know the streets and where everything is at.”

That knowledge came in handy when, at the end of the 30 days, Reynolds sat down for his exit interview with LaGrange Public Safety Chief Lou Dekmar. For almost an hour, Dekmar asked the officer questions ranging from LPD’s pursuit policy to response codes to use of force.

Reynolds had to give thorough answers to Dekmar as to what those policies mean, why they are enforced, plus how they protect the citizen and the officer involved in the incident. He also had to know all the crime statistics for the city from this year and the last few years.

The chief then gave Reynolds a series of different scenarios, from a simple traffic stop to unethical behavior by a fellow police officer, and asked him to describe what he would do in each situation.

According to Dekmar, the interview is just another way LPD makes sure officers understand the agency’s policies and procedures, and to ensure the safety of people and officers should an incident occur in the city.

Reynolds passed the interview with flying colors, and the following day, started his first solo shift as a patrol officer with LPD.

The Daily News accompanied Reynolds as he made some of his first rounds through the streets of LaGrange.

It had already been a busy day for him. Reynolds said he responded to a walk-in report of fraud, woman assaulted by cousin, an accident involving a stolen vehicle, an unwanted person in Chick-Fil-A and a check on someone’s well-being. A call for an entering auto was next on list – nothing he couldn’t handle.

“Most people don’t realize how much goes into the job,” said Reynolds. “They think we write tickets and arrest people, but it’s a lot more than that.”

Officer Reynolds found the victim in Calumet Park and started processing the scene.

LPD officers must also go above and beyond to further their law enforcement knowledge by completing at least 20 hours of in-house training and 40 hours of training at an outside facility in a subject matter related to their job.

Those requirements are another reason Reynolds said he wanted to join LPD.

“That was a highlight for me coming to the agency. They hold their officers accountable for knowing policies and procedures in how the city wants you to do things,” he said. “They also require more training … LPD takes it a step further by requiring the 40 hours of extra training – and that’s a minimum.”

Reynolds found his next call for service on his own – a lady who seemed to be stranded in the middle of the road because her car wouldn’t start. He immediately pulled behind her and offered assistance.

It was a fairly quiet first night for Reynolds, but he knows things can change in an instant. The new LPD officer said he is focused now on doing his job to the best of his ability and hopes to positively impact lives along the way.

“In this job, we can be as proactive as we want, unless we’re going from call to call,” said Reynolds. “Being a patrol officer, we can come out and speak to the community and build relationships with them … we can address some of the problems and issues and folks can get help … and we can hopefully better the community.”

Reynolds will start as a patrol officer with LPD, but said he is interested in eventually joining the agency’s Crime Suppression Unit. CSU officers address a multitude of issues and utilize nontraditional patrol techniques in their attempt to deter criminal activity, according to LPD.