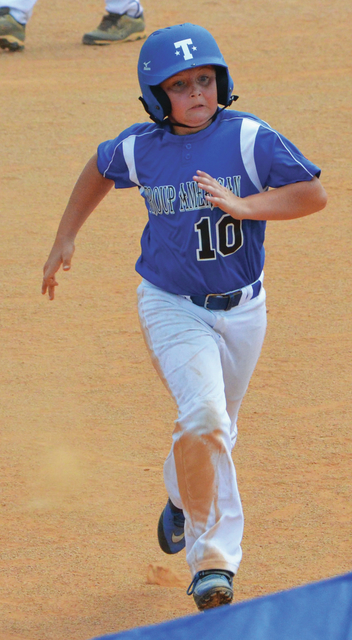 Steven Hill had a huge day for Troup American with five hits, including a home run. Kevin Eckleberry | Daily News

http://lagrangenews.com/wp-content/uploads/sites/37/2015/07/web1_7-13-american4.jpgSteven Hill had a huge day for Troup American with five hits, including a home run. Kevin Eckleberry | Daily News MANCHESTER – In baseball, there is no game clock, which means that until that final out is recorded, no lead is ever truly safe.

Troup American found that out the hard way on Sunday in its final game in the Dixie Youth Baseball 11-12-year-old state tournament.

Troup American took a 20-11 lead into the bottom of the sixth inning, but Bleckley County rallied for 10 runs in its final at-bat to capture a 21-20 victory.

The win secured the pool championship for Bleckley County, while Troup American completed its tournament stay with an 0-4 record.

While the team didn’t have the success it was hoping for, Troup American coach Chris Jones said it was an enjoyable experience for all of the players.

Troup American finished second in the district tournament to make it to state.

“The main thing is having fun,” Jones said. “We knew we had a young team, and we knew we’d come up against some strong teams. It was an experience for them. It was a good experience to have under their belts.”

After falling to Columbia County on Friday, Troup American lost to Norcross and Baconton on Saturday.

Troup American arrived at the baseball complex in Manchester on Sunday afternoon hoping to exit the state stage with a win, and for much of the game it looked like that was going to happen.

As Bleckley County came to bat in the bottom of the sixth inning, it was trailing by nine runs, but it turns out that deficit, while daunting, was manageable.

Some clutch hits combined with a few defensive miscues by Troup American made the difference as Bleckley County plated 10 runs in the inning.

Many of the Troup American players will be eligible for the 9-10-year-old age group again next year, so they may get a chance to experience this again next summer.

“This was a real young team,” he said. “So there should be some that makes it next year.”

Troup American scored 20 runs in six innings, so it obviously had plenty of success at the plate, and no one had a better day than Steven Hill, who had five hits while driving in eight runs.

Hill had three singles, a triple, as well as a home run that sailed over the right-field fence with room to spare.

Hill, Troup American’s leadoff hitter, began the first inning with a base hit, and he later scored when Bram Cronic reached on an infield single.

After Bryson Monteith and Blake Oldham walked, Dallas Pearson’s base hit brought in a run to give Troup American a 2-0 lead.

Boone Crockett led off with a bunt single, and later in the inning with the bases loaded, Hill’s base hit made it 4-0.

Cronic reached on a fielder’s choice to drive in a run and make it 5-0.

After Bleckley County got within two, Troup American exploded for five runs in the top of the third to go on top 10-3.

Hill had the big blow, a triple that plated two runs, and he came around to score on the play when the ball was thrown away.

The next hitter, Grady Westmoreland, but down a perfect bunt and when the throw to first went awry and sailed into the outfield, he never slowed down, and he ended up scoring the inning’s fifth and final run.

Back came Bleckley County, which tied it with seven runs in the bottom of the third.

Undeterred, Troup American responded with five runs of its own in the top of the fourth.

Jaylen Brown doubled and scored on a base hit by Oldham, and Oldham later scored on an error to give Troup American a 12-10 lead.

After J.T. Burks walked and Eli Jones legged out an infield single, Hill stepped to the plate and drove the ball the opposite way for a three-run home run, giving Troup American a 15-10 lead.

Troup American scored three more runs in the fifth inning to push the lead to 18-11.

Cronic was hit by a pitch, Brown reached on an infield single, and Monteith followed with a base hit to load the bases.

Oldham grounded out to bring in a run, and after another run scored on an error, Burks delivered a double to give Troup American its 18th run.

Troup American capped its scoring with two runs in the sixth inning.

Jones led off with a double, Hill followed with his fifth hit of the day, and Westmoreland walked.

With the bases full, Cronic walked to drive in a run, and Monteith then delivered an RBI single, and Troup American had a 20-11 lead, setting up the dramatic bottom of the sixth.