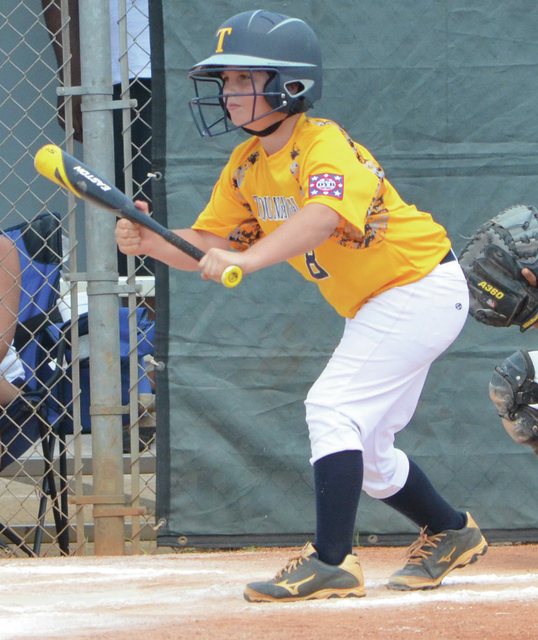 Troup National’s Devon Murphy is congratulated after scoring one of his team’s runs in a 10-5 victory over Albany on Sunday in the Dixie Youth Baseball 9-10-year-old state tournament. Kevin Eckleberry | Daily News

http://lagrangenews.com/wp-content/uploads/sites/37/2015/07/web1_7-13-national1.jpgTroup National’s Devon Murphy is congratulated after scoring one of his team’s runs in a 10-5 victory over Albany on Sunday in the Dixie Youth Baseball 9-10-year-old state tournament. Kevin Eckleberry | Daily News MANCHESTER – The beat rolls on.

The Troup National 9-10-year-old all-star team wrapped up a perfect weekend by beating Albany 10-5 on Sunday in the Dixie Youth Baseball state tournament.

Troup National went 4-0 to win its pool, and it will join the other two pool champions next weekend in Manchester to determine a state champion.

The team that wins state will advance to the Dixie Youth Baseball World Series.

Troup National is now 7-0 in tournament play after winning all three of its district games and the four games at state, and the team has done it in dominant and impressive fashion.

Sunday’s game was somewhat competitive, but that hasn’t been the norm.

Albany was the only team that forced Troup National to play the full seven innings at state.

At the district tournament, Troup National outscored is three opponents by a combined score of 55-4.

So in seven tournament games, Troup National has scored 109 runs, and given up just 11 runs.

The team is made up largely of players who have been a part of the same travel-ball team since the summer of 2013.

Chip Medders, the head coach of the travel-ball team and an assistant to Danny Swann on the all-star team, said it’s a great group of players.

“I’d coach this little group here every day of the week,” Medders said. “I just love working with them. They don’t complain about anything. They just come to work. There’s really no me involved.”

Albany at least made things semi-interesting.

After falling behind 3-0, Albany rallied for three runs in the top of the second to tie it.

Troup National answered in its half of the third for a run to take a lead it wouldn’t relinquish.

“When we scored and they came back, we’ve been in those situations,” Medders said. “We understand how to keep battling.”

Trey Cook, who had pitched just one inning in relief coming into Sunday’s game, got the complete-game victory.

“He’s a hard one to hit,” Medders said. “He’s got a good breaking ball, and he knows how to pitch, too. He’s not just throwing. He knows what he’s doing.”

Troup National opened the scoring with three runs in the bottom of the first inning.

Ty Medders and Cole Garner had RBI singles, and Cook, who reached on a walk, scored on a wild pitch to make it 3-0.

When Troup National came to bat in the bottom of the second, it was a tie game.

T.J. Wilkerson walked, he advanced on a Seth Stargell sacrifice bunt, and he scored when Preston Pressley reached on a bunt single.

After Cook set Albany down in order in the top of the third, Troup National added three more runs in the bottom of the inning.

Colton Esposito singled, and he scored when Devon Murphy reached on an error.

After a Medders base hit, Cook helped himself with a two-run single, and Troup National led 7-3.

Albany scratched two runs across in the top of the fourth to get within two, but Troup National added three runs in the bottom of the inning to extend the lead.

The first two Troup batters struck out, but Jesse Swann was hit by a pitch to jump-start the rally.

Esposito followed with a single, and Murphy came through with a clutch two-run double, and he also scored on the play thanks to an Albany error.

Medders followed with a base hit and was left stranded, but the damage was done, and Troup National had a 10-5 lead.

Albany didn’t score again, and that was that.

Troup National kicked off its state stay with the one-sided win over Buford, and it followed that up with two wins on Saturday that ended early because of the run rule.

In the 10-0 win over Norcross, Murphy hit a walk-off home run to end it.