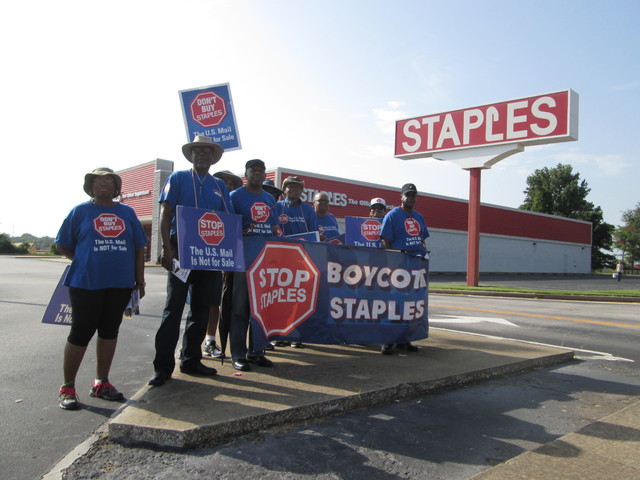 Members of Stop Staples, a protest group started by members of the American Postal Workers Union, gather outside the Staples on New Franklin Road to advocate a boycott against the retail store. The group is protesting against postal services offered by Staples.

http://lagrangenews.com/wp-content/uploads/sites/37/2015/07/web1_IMG_05931.jpgMembers of Stop Staples, a protest group started by members of the American Postal Workers Union, gather outside the Staples on New Franklin Road to advocate a boycott against the retail store. The group is protesting against postal services offered by Staples.

LaGRANGE — Protesters gathered outside Staples on New Franklin Road on Friday to demand that residents boycott the office supply chain’s stores. The protest group was made up of members of the American Postal Workers Union in Atlanta.

“We are boycotting Staples because they are taking away jobs from hard-working U.S. Postal workers,” said Pat Gunn, who identified herself as leader of the protest group.

The U.S. Postal Service launched a program in 2013 that allowed Staples to offer postal services at retail locations. The agreement drew outrage from postal union members, who say that Staples should not be allowed to handle U.S. mail. The protest movement, called Stop Staples, is taking aim at Staples stores across the country.

“Staples is using store employees who are being paid about $9 an hour to provide a service that highly trained postal workers should be doing,” said Gunn. “They are taking away our jobs.”

Gunn said she is a retired U.S. Postal Service employee who travels from Atlanta to the Staples location in LaGrange to protest nearly every week. She hopes that the protesting effort convinces residents to send their mail from their local post office.

The National Labor Relations Board is set to hold a hearing Aug. 17 on a complaint that the U.S. Postal Service illegally subcontracted work to Staples. According to the complaint, the Postal Service violated the law when management entered into a deal with Staples without first bargaining with the union, which it is required to do under a collective bargaining agreement.

“We hope that something will be done to preserve our Postal Service,” said Gunn. “That’s why we’re out here to let people know that the U.S. mail is not for sale.”

The USPS has been plagued by financial struggles in recent years and reported a $1 billion net loss after the second quarter of fiscal 2015.

According to the Stop Staples protest group website, www.stopstaples.com, USPS employees are required to take an oath to uphold the U.S. Constitution while Staples employees are not required to adhere to the oath.

Postal services are being offered in about 1,000 Staples locations nationwide. Staples offers a range of postal services to customers from purchasing stamps to shipping packages. Gunn said that her protest group has been taking a stand against Staples since the USPS agreed to allow shipping services at the retail chain.

“It’s getting close to the beginning of the school year and this is (Staples’) busiest time of the year,” said Gunn. “We want to really hit them hard right now.”

Messages from the Daily News left with the Staples corporate office Friday seeking comment had not been returned as of press time this morning.