Irish guests get taste of South at LaGrange churches 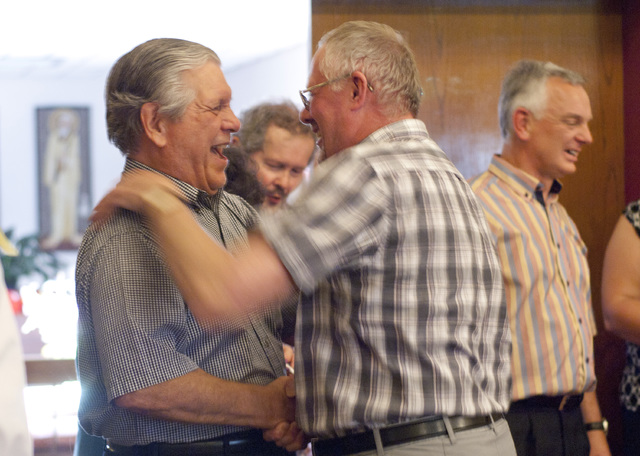 LaGRANGE — Roy Dreaning is a long way from home – kind of.

He and the other four members of the gospel band Live Issue, based in LaGrange’s sister city Craigavon, Northern Ireland, are touring through the southeastern United States this week and next, stopping in LaGrange on Monday and today for a performance at East Vernon Baptist Church on Roanoke Road.

After leaving LaGrange, the band will continue through other states to their final destination in Nashville, Tennessee, where four years ago they performed at the Grand Ole’ Opry.

Although Dreaning knows he’s quite a way from the green hills of Northern Ireland, he’s also come home, he said.

As a gospel musician, Dreaning said at a reception in his band’s honor at Saint Mark’s Episcopal Church on Monday that the Deep South is, in a way, home to the music that’s so close to his heart.

“Anytime we come to America, we’re always trying to learn more about the music that’s from here,” he said.

It’s not his first time in LaGrange, either, he said. He and his band mates have stopped here two other times, and that’s not a coincidence. LaGrange and Craigavon have been sister cities for more than 20 years, explained Ethyl Ault, the president of the LaGrange International Friendship Exchange, or LIFE.

To honor the city’s guests, Ault wanted to do something special and give them a traditional Southern welcome: food.

“We heard they were coming through and as a sister city, we wanted to offer them dinner,” Ault said.

She and other volunteers put together the Southern staples for a small dinner Monday: fried chicken, baked beans, cole slaw, potato salad and sweet tea.

Ault, who’s traveled to Craigavon and noted it as “more shades of green” than she thought possible, said as president of LIFE, she’s trying hard to grow the organization and promote multiculturalism in the city – not just through music and fried chicken – but by hosting festivals and cultural exchanges in the future.

According to Ault, there are more than 20 different cultures that live in Troup County alone. In Troup County schools, for example, 17 different languages are spoken in the homes of students, according to a presentation compiled by the school system.

Ault said she aims to not only welcome visitors like the members of Live Issue, but also promote understanding and learning between different cultures.

“We want people to get more cultural experiences and to understand each other, and share their talents,” she said.

Live Issue is slated to perform at at East Vernon Baptist Church, 2918 Roanoke Road, today at 7 p.m. The event is free and open to the public, according to the church’s pastor, the Rev. Bernie Pasley.

“Everybody’s welcome,” he said. “We’d love to see a full house of people who come to hear God’s word through music.”