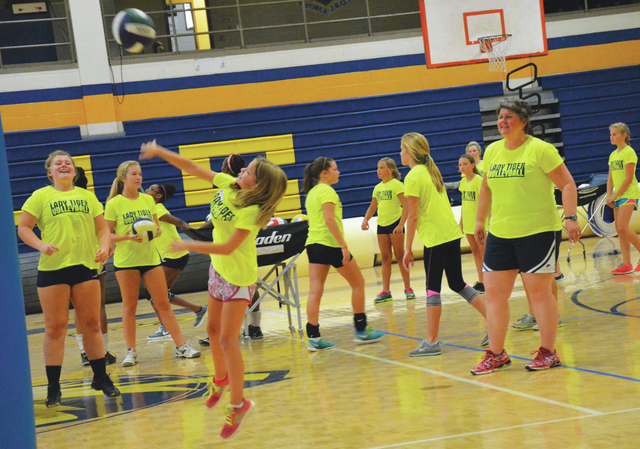 They were all smiles at a youth volleyball camp at Troup High on Tuesday. The two-day camp is for middle-school aged players. Kevin Eckleberry | Daily News

http://lagrangenews.com/wp-content/uploads/sites/37/2015/07/web1_7-15-volleyball3.jpgThey were all smiles at a youth volleyball camp at Troup High on Tuesday. The two-day camp is for middle-school aged players. Kevin Eckleberry | Daily News LAGRANGE – It’s been a busy summer for Jodi Dowden, but she always finds time to share her love of volleyball.

Dowden, the head volleyball coach at Troup High, recently returned from a two-week trip to Africa, and since then she has hosted a pair of camps.

Last week, there was a volleyball camp at Troup High for high-school aged players.

This week, the campers are a bit younger, with 20 middle-schoolers turning out for a two-day camp at Troup High.

The camp kicked off on Tuesday and wraps up today, and both sessions are three hours long, which Dowden said is long enough for young players.

“The older middler-schoolers could probably go a little longer,” Dowden said. “We begin in the fourth grade, so the little ones, they have trouble with attention span, so we’ve got to break it up.”

Dowden has been hosting a middle-school camp for years, and she said it’s a great way to let the young players find out what the game is all about.

“It’s just kind of to give them an introduction,” Dowden said. “My players, they come and help out as coaches. We get a lot done.”

Dowden said 25 of her high-school players are lending a hand this week.

Soon enough, Dowden will be leading her players at Troup onto the court for the start of a new season.

High-school volleyball is played in the fall in Georgia, and Troup will get together for its first official practice on Aug. 3, with the season set to begin soon after.

Most of the key players from last season’s team will return as the Lady Tigers look to make it to the state tournament after missing out a year ago.