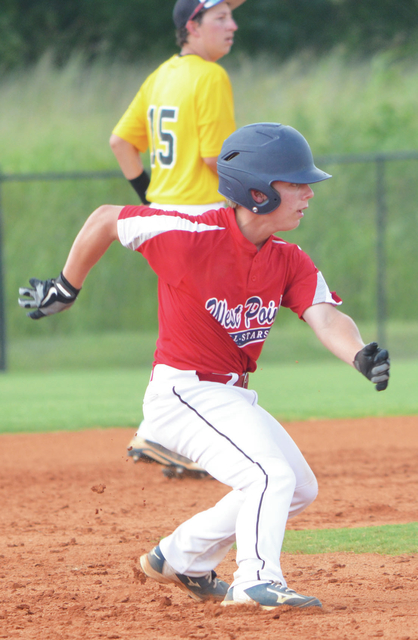 West Point’s Brantly Robinson puts the brakes on and returns to second base during Tuesday’s game. Kevin Eckleberry | Daily News

http://lagrangenews.com/wp-content/uploads/sites/37/2015/07/web1_7-15-westpoint5.jpgWest Point’s Brantly Robinson puts the brakes on and returns to second base during Tuesday’s game. Kevin Eckleberry | Daily News

In the opening game of the Senior League state tournament, the West Point 16-and-under all-stars lost to Martinez Evans 9-4.

Today, in the championship round of the double-elimination tournament, those same two teams will meet again, and West Point will be looking to turn the tables.

Since that opening loss, West Point has won three consecutive games to become one of the last two teams standing.

West Point and unbeaten Martinez Evans will play at 5 p.m. today, and if West Point wins, a winner-take-all game will be played at 8 p.m.

If Martinez Evans wins the first game today, the tournament is over.

The state champion will advance to the regional tournament with a chance to make it to the Senior League World Series.

“We know we can beat them,” West Point coach Cory Searels said after his team beat Harris County 15-0 on Tuesday to advance. “We’re just ready to see them again tomorrow.”

The good news for Searels is that every pitcher on his staff will be available to pitch today.

That includes LaGrange High’s Cole Freeman and Troup High’s Neal Searels, who each threw three shutout innings in their starts on Monday and Tuesday, respectively.

In Tuesday’s 15-0 win over Harris County, it was Neal Searels getting the start for West Point, and he threw three dominant innings before Tyler Lott pitched the final two innings.

The pitchers were backed up by a defense that made all of the plays.

One of the defensive highlights came in the third inning when West Point right fielder Brantly Robinson, who’ll be a sophomore at Troup High, threw a runner out at first base on what looked like a sure base hit.

Robinson fielded the hard-hit ball on one bounce, and he gunned the ball to first base, just beating the Harris County base runner.

“We’ve got a pretty good defense,” Neal Searels said. “It helped me today.”

Neal Searels also got it done the plate wiith a pair of hits, and Kyle Campbell also had a two-hit day for West Point.

After the loss to Martinez Evans, West Point returned to the field on Sunday and overwhelmed Rockmart 16-0.

On Monday, West Point beat Oconee County 17-2, and it followed that up with Tuesday’s blowout victory.

In their past three games, West Point outscored its three opponents by a combined score of 48-2, and all of the games ended after five innings because of the run rule.

Neal Searels said it’s a close-knit group of players, and that camaraderie has been evident in the state tournament.

“This is probably one of my best teams,” Searels said. “We don’t ever argue. We get along really well. We’ve got a good team.”

The mission now is to make sure the season doesn’t end today, and Neal Searels like his team’s chances, especially with the way the pitching is set up.

“We’ve got our best pitchers coming back,” he said. “We’re really looking forward to it. We’ve got the team to do it.”