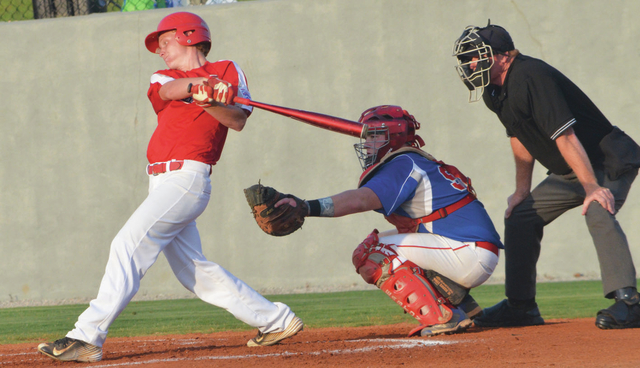 After losing its state-tournament opener on Saturday, West Point knew that one more loss would mean the end of its season.

In the two games since it lost to Martinez Evans 9-4, West Point has beaten Rockmart and Oconee County by a combined score of 33-2.

After blanking Rockmart 16-0 on Sunday to stay alive, West Point returned to the field a day later and overwhelmed Oconee County 17-2, with LaGrange High’s Cole Freeman pitching three hitless and scoreless innings to get the win.

West Point will play Harris County at 5 p.m. today, and the winner of that game will play Martinez Evans on Wednesday at 5 p.m.

If West Point makes it to Wednesday, it would need to beat Martinez Evans twice to capture the championship.

One West Point all-star team has already won a state title, with the 18-and-under Big League team taking top honors at the state tournament in Evans.

“We’re hoping to do it,” West Point coach Cory Searels said. “We’re trying our best. We’ve got the kids to do it.”

After the disappointing start to the tournament, West Point has had it on cruise control.

In Monday’s game, West Point scored five runs in the first inning, and the rout was on.

In his three innings, Freeman only allowed one base runner on a walk, and he struck out four batters.

In his final inning of work, Freeman struck out the side.

After West Point spent about 30 minutes at the plate during an 11-run fourth inning, Freeman didn’t return for the bottom of the fourth.

Bubba Burrows pitched a scoreless fourth inning, and McKeyan McGinnis finished things off on the mound in the fifth inning.

The game, originally scheduled for seven innings, ended early because of the run rule.

“We wanted to win in five innings to save our pitching,” Searels said.

With one run already in on a passed ball in the first inning, Noah West legged out an infield single to bring in another run, and it was 2-0.

Troup High’s Neal Searels then came through with a two-run single to make it a 4-0 game, and Tyler Lott capped the first-inning rally with an RBI hit.

West Point didn’t score in either the second or third inning, but it busted the game open with 11 runs in the fourth inning to take a 16-0 lead.

Seventeen West Point batters came to the plate in the inning, and there were four hits, six walks and three errors.

Luke Thompson got the scoring parade started when he walked with the bases loaded, and McGinnis followed with a two-run double.

West came to the plate twice in the inning, and he drove in one run with a single, and another run when he walked with the bases loaded.

Dalton Thrower added an RBI single in the inning, and Troup High’s Brantly Robinson drove in another run with a bases-loaded walk.

After Burrows threw a perfect bottom of the fourth, West Point scored another run in the fifth inning, with McGinnins walking with the bases loaded.

Oconee County avoided the shutout by scoring a pair of runs in the bottom of the fifth, and it also got its first hit in the inning, but it was too little too late.

In Monday’s other tournament game, Martinez Evans secured a spot in the championship round with a 15-0 win over Harris County, which now has one loss, just like West Point.