LaGrange survivor: ‘Don’t be afraid to dance in the rain’ 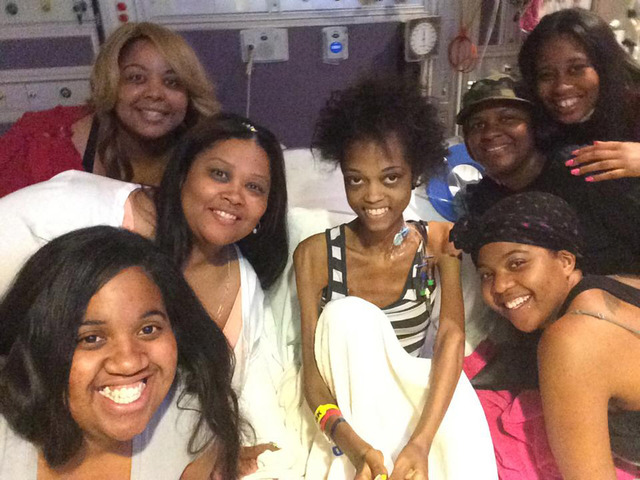 Raven Varner, a 21-year-old cancer survivor from LaGrange, sits in a hospital bed surrounded by loved ones in this undated photo. A benefit for her is set for Friday at Confidence Missionary Baptist Church. Varner was diagnosed with stage 4 rhabdomyosarcoma, or RMS, in July 2012 and is still suffering from health problems left by medical procedures to remove a tumor.

http://lagrangenews.com/wp-content/uploads/sites/37/2015/07/web1_WEB0716Raven2.jpgRaven Varner, a 21-year-old cancer survivor from LaGrange, sits in a hospital bed surrounded by loved ones in this undated photo. A benefit for her is set for Friday at Confidence Missionary Baptist Church. Varner was diagnosed with stage 4 rhabdomyosarcoma, or RMS, in July 2012 and is still suffering from health problems left by medical procedures to remove a tumor.

After completing her first year of college in July of 2012, she was diagnosed with stage 4 rhabdomyosarcoma, or RMS, a cancerous tumor of the muscles that are attached to the bones. Since then, she has endured numerous treatments and overcome every obstacle she faced.

Now, the 21 year old has another mountain to climb.

Doctors removed 95 percent of a mass that covered her entire abdomen. They also had to remove her right ovary and Fallopian tube during the procedure. The rest of the cancer was treated and cured with chemotherapy and radiation. Yet Varner says that she is in worse condition than when she had cancer.

“This is worse than when I was going through chemo,” she said. “I can’t enjoy food, and I can’t really enjoy anything. I could at least eat and go enjoy doing stuff when I was having chemo.”

Varner is now suffering from adhesions – like scar tissue – inside her abdomen from the medical procedure that removed the cancerous mass. According to her mother, Michelle, the adhesions have left her in severe pain and she is dealing with recurring fungal infections among other issues related to the cancer.

“Anything she eats, she isn’t able to digest it,” her mother said. “She gets very sick and starts vomiting.”

Unable to eat solid food, Raven is fed by means of total parenteral nutrition, an intravenous feeding method that bypasses the digestive system.

“The treatment has left her just as bad as the cancer did,” Michelle Varner said.

Raven’s mother said that doctors are unable to perform surgery to remove the adhesions because she is too malnourished from lack of food. After doing research, Michelle Varner found a treatment facility called Clear Passage in Gainsville, Florida.

“I found this clinic and it sounded like just what we needed,” she said. “I asked our doctor if it was a legitimate treatment, and he called and spoke with the director. After he talked to him, he said that it is definitely worth a try.”

The clinic specializes in treatment of abdominal adhesions without the use of surgery or medicine through a special massage technique.

Pamela Dowell, founder of Women Setting Goals Ministries in LaGrange, is a friend of Michelle Varner. When she heard that Michelle was trying to send Raven to Clear Passage, she decided to do something that would help her get there.

“It was laid on my heart to do,” Dowell said. “I thought a lot about it and prayed, and I decided that we needed to have a benefit concert to raise money for Raven.”

Dowell said that she was inspired to contact Brandon Hanner, minister of music at Union Chapel United Methodist Church in LaGrange. Dowell and Hanner have been working together since April to organize the benefit concert.

The event is set for Friday at Confidence Missionary Baptist Church, 705 Colquitt St. The concert is set to begin at 5:30 p.m. and feature gospel music artists such as Momma Hope, April Ross and others. Entry is free, but donations will be requested.

“We’re hoping for a large outcome for the benefit,” said Michelle. “We really hope that we can raise the $5,000 we need so that Raven can get the help she needs.”

Organizers are encouraging people to wear white in a show of solidarity for Raven’s recovery. Michelle said that Raven is hoping for donations from anyone that is able to give, and an account has also been set up at SunTrust Bank in LaGrange to receive donations.

Through all of her struggles, Raven still tells people to “Come dance in the rain with me.”

“When I say that, it means don’t be afraid of whatever you’re going through in life right now. No matter how dark it gets, we should never be afraid to go out and dance in the rain.”