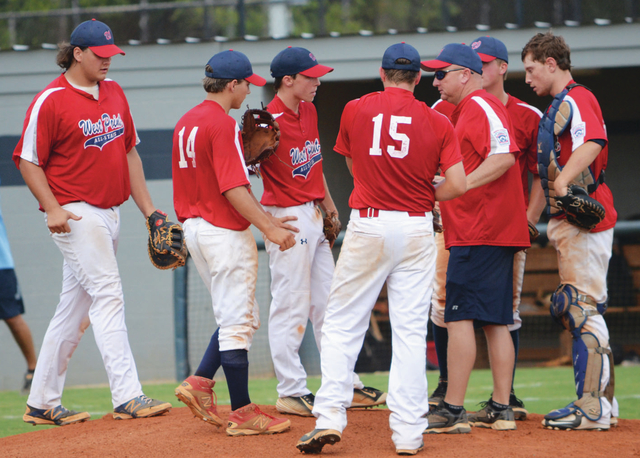 Heading into the final day of the Senior League state tournament on Wednesday, the home-standing West Point all-stars knew they needed to beat Martinez Evans twice to secure the first-place trophy and earn an invitation to the district tournament in Florida.

Martinez Evans took the field on Wednesday with an unblemished record, while West Point had one loss in the double-elimination tournament.

The West Point all-stars got halfway to achieving their goal after Luke Thompson threw a complete-game gem in a 5-2 victory.

That win set up a winner-take-all game about 30 minutes after the completion of the first game.

Unfortunately for West Point, the second game didn’t go nearly as well as the first one.

Martinez Evans scored a run in the first inning to take a lead it wouldn’t relinquish, and it went on to claim a 6-2 victory.

West Point finished the tournament with a 4-2 record, while Martinez Evans went 3-1.

Here’s a look at both of Wednesday’s game.

Luke Thompson was in control.

Martinez Evans scored a pair of runs in the bottom of the first inning to take a 2-1 lead, but it didn’t score again against Thompson, who went the distance for the seven-inning complete game.

Thompson was helped out by some stellar defensive plays, including a diving catch by shortstop Cole Freeman in the seventh inning, as well as some nice plays by third baseman Neal Searels earlier in the game.

Thompson also helped himself out by picking a runner off of first base in the final inning.

Trailing by a run, West Point tied it with a run in the third inning.

Freeman got things started with a two-out single, and he stole second and scored on a base hit by Kyle Campbell.

It remained a 2-2 game until West Point pushed two more runs across in the fifth inning.

Ryan Meadows led off with a walk, and he moved to second on a sacrifice bunt by Thompson.

After a pitching change, McKeyan McGinnis drove the ball into the outfield for an RBI single, and West Point led 3-2.

Freeman kept things going with a base hit.

After another pitching change, Noah West reached on an infield single to load the bases, and Searels drove in a run the hard way when he was hit by a pitch, and West Point led 4-2.

Martinez Evans threatened in the fifth inning, but Thompson got a fly out with runners on second and third for the third out.

West Point capped the scoring with a run in the top of the fifth.

Bubba Burrows led off with a single, and after a sacrifice bunt by Meadows, Thompson delivered a base hit to drive in a run.

Armed with a 5-2 lead, Thompson set Martinez Evans down in the sixth and seventh innings, and that was that.

For the second straight game, Martinez Evans took the lead in the first inning, and this time West Point was unable to rally.

After scoring a run in the first inning to grab a 1-0 lead, Martinez Evans added two more runs in the fifth inning to go up 3-0.

West Point got within a run by scoring its only two runs in the bottom of the fifth inning.

Brantly Robinson came off the bench and got things started with a pinch-hit single, and Bubba Burrows was hit by a pitch.

After a pitching change, Ryan Meadows stepped to the plate with runners on first and second, and he bunted the ball toward the right side of the infield.

The ball was bunted so hard it made it all the way into right field, and some confusion on the part of Martinez Evans allowed Meadows to make it to second for an unusual double, and two runs scored on the play.

West Point was unable to push the tying run across, though, and Martinez Evans escaped the inning with a one-run lead.

It was still a 3-2 game when Martinez Evans scored three critical insurance runs in the top of the sixth inning.

West Point got two runners on in the bottom of the seventh on a base hit by Searels and a walk by Burrows, but both men were left stranded as the game ended.

Cole Freeman was the starting pitcher for West Point, and he pitched well and left the game in the fifth inning.

Burrows and Tyler Lott finished things off on the mound for West Point.