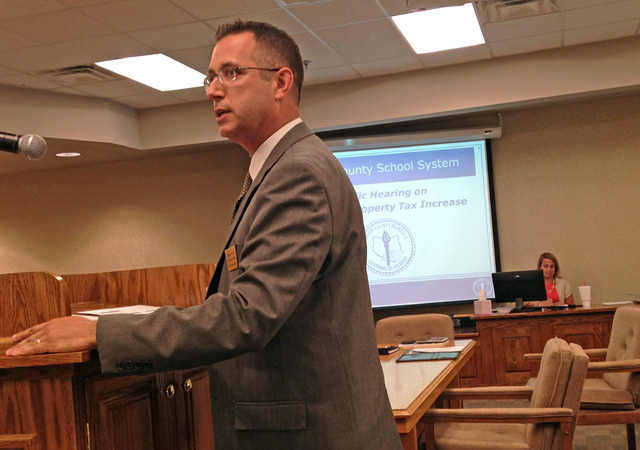 Byron Jones, Troup County School System CFO, speaks Thursday during a presentation about the school system’s tax millage and finances prior to a hearing on the system’s millage rate. The Board of Education voted to set the millage rate at 18.85, unchanged from last year.

http://lagrangenews.com/wp-content/uploads/sites/37/2015/07/web1_WEB0717JonesBOE1.jpgByron Jones, Troup County School System CFO, speaks Thursday during a presentation about the school system’s tax millage and finances prior to a hearing on the system’s millage rate. The Board of Education voted to set the millage rate at 18.85, unchanged from last year.

LaGRANGE — The Troup County Board of Education on Thursday set its property tax millage at 18.85, the same rate it has kept for the last 10 years.

Two people signed up to speak at a public hearing that preceded the vote. The hearing followed a presentation by school system CFO Byron Jones, who provided information about the system’s funds over the last several years and why the millage rate is considered a tax increase even if the board is not increasing the millage.

The first person to speak at the hearing asked for clarification on how the rate was determined and noted a fact Jones made in his presentation that the tax digest has increased by 2.66 percent, which sounded like a tax increase to her. Jones offered to clarify for her and after they spoke, she said she felt satisfied with the answer. The second person signed up to speak said Jones’ presentation had clarified her questions.

The millage rate is like a percentage that a property owner pays based on the taxable amount of their property. In his presentation, Jones explained that since the overall tax digest – the value of all property in the county as evaluated by the Troup County Board of Assessors – has increased by a total 2.66 percent, the board is required by the state to either “roll back” its millage to at least 18.361 or advertise the millage rate as an increase.

The “roll back” millage would mean the school system receives the same dollar amount from property tax collections as it did last year. Keeping the current millage rate means the school system will overall receive more in property tax funds, but the only taxpayers who will pay more are those whose property values have increased. Anyone whose property value is unchanged will not see a difference, and anyone whose valued decreased would pay less.

Anyone whose value has changed and wants to appeal the decision may contact the Troup County Board of Assessors at 706-883-1625 to request an appeal. The board has an office open 8 a.m. to 5 p.m. Monday through Friday in the Troup County Government Center, 100 Ridley Ave.

Jones noted that the state has started to restore some of its funding to local school systems that in recent years has been cut, referred to as state austerity cuts. The increased funding helped the local school system increase its budget this year and restore programs it had cut in recent years, but Jones said that it still is underfunded based on the formula the state uses to determine funding.

“We’re going to receive a little more, additional money next year, but it’s really a reduced amount that they’re cutting us,” Jones said. “They’re going to cut us ($) 3.3 million, so we get ($) 2.1 million back” compared to last year.

The school system has certain costs that it is required to pay by the state. That includes health insurance costs for classified employees – such as custodians, food service workers and paraprofessionals – increasing from about $1,900 to about $8,900 per employee annually. The school system had budgeted for the cost increase for the full fiscal year that started July 1, but has received a reprieve because the state pushed back the implementation until Jan. 1, Jones said.

The system also has a required percentage match to the Teacher Retirement System of Georgia, which Jones noted has increased from matching 9.24 percent in 2002 to 14.27 percent for the current fiscal year.

“So keep in mind that while the state is reducing our austerity and giving us a little more money, they’re telling us right here that we’ve got two items that we have to manditorily do,” he said.

Jones also noted that – when including bond payments that the system was paying prior to receiving special-purpose, local-option sales tax, or SPLOST, funds – the school system’s millage has decreased over the last 20 years. In 1995 the combined general fund millage and bond payment millage was 19.66 mills, Jones said. SPLOST funds allowed the system to pay off its bonds and remove them from its property tax millage, he said.