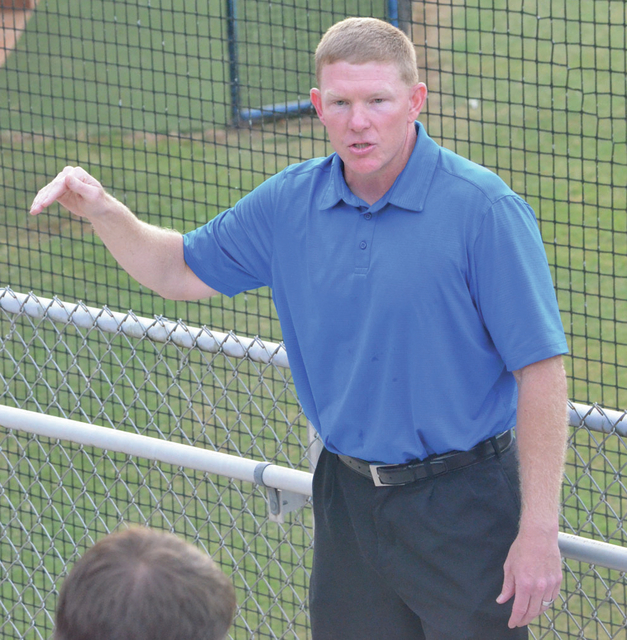 David Smart was an assistant coach at Columbus High for 10 seasons, and he was the Northside High head coach from 2009 to 2014. Kevin Eckleberry | Daily News

http://lagrangenews.com/wp-content/uploads/sites/37/2015/07/web1_7-17-smart2.jpgDavid Smart was an assistant coach at Columbus High for 10 seasons, and he was the Northside High head coach from 2009 to 2014. Kevin Eckleberry | Daily News

LAGRANGE – Wearing a Granger blue shirt, and with the sun dipping down behind the outfield fence at the field where he’ll lead his new team, David Smart was introduced as LaGrange High’s new head baseball coach on Thursday night.

After his hiring was approved during the Troup County Board of Education meeting, Smart made his way to Granger Park where he was introduced by LaGrange athletic director Mike Pauley.

There were dozens of people on hand to welcome Smart, including parents of the players he’ll be coaching next spring, as well as many of LaGrange High’s current and former coaches.

Smart, who was an assistant coach at Columbus High for 10 years before serving as the Northside head coach from 2009 to 2014, said he is thrilled to be associated with the LaGrange baseball program.

Smart is taking over for Todd Herrington, who left after three seasons to become the head coach at Northgate High.

“I wasn’t looking to make a move to be real honest with you,” said Smart, who spent the 2014-2015 school year as a coach at Brookstone High in Columbus. “But when an opportunity came to come to a community like LaGrange, and a (job like this) opens up, you take notice. If you’re worth your salt, you’re going to take notice and pay attention to what’s going on around you, and I did. I know what the history of the program is.”

Smart, who was an assistant at Columbus when LaGrange won its lone state championship in 2004 under long-time coach Donnie Branch, said he knows what it means “to be a Granger” and he is excited about the prospect of continuing the program’s winning tradition.

“We’re going to pick up that torch,” Smart said. “We will not let that tradition die. We will pick that torch up, and we will run with it, and it will be brighter, and it will be better than it ever has been before. I promise you that. That’s what our objective is, to uphold that great tradition that has come before us.”

Smart said LaGrange has a reputation in the baseball community for having “hard-nosed kids” that are “well-coached.”

He also said his outsider’s view of LaGrange’s program is that the players are “fearless.”

“It doesn’t matter who they’re playing, whether it’s Columbus or Cartersville, or the Atlanta Braves, they’re not scared to step on the field and get between the lines,” Smart said. “They think they’re as good or better than anybody, regardless of what anybody else says.”

Many of the coaches who helped LaGrange establish that mentality were on hand on Thursday, including Branch.

Smart told the parents in attendance that it will be a group effort to get the program where he feels it should be.

“It’s going to take everybody in this group to achieve the things we want to achieve,” he said. “Let’s go. Hop on. It’s not about me. I’m just the guy who’s been given the direction to say, here, go lead this group, and that’s what I’ll do to the best of my God-given ability.”

Smart made a point of acknowledging Branch, who stepped down following the 2012 season.

“I’d like to give a special thanks to somebody I consider a great friend, and a great mentor, coach Branch,” Smart said.

Smart has spent nearly all of his coaching career in Columbus.

He was an assistant coach at Hardaway for three years before heading to Texas to become the head coach at Del Rio High in 1998.

He was in Texas for just one year, and after returning to the Peach State, he joined Bobby Howard’s staff at Columbus High, and he remained there for 10 phenomenal seasons.

During Smart’s decade at Columbus, the team played for seven state championships, and it won three of them.

In 2009, Smart went cross-town to take over the Northside program, and he enjoyed a lot of success there.

During his six seasons at Columbus, Smart had a record of 93-68, and he guided the 2009 and 2010 teams to the state quarterfinals.

After the Patriots missed the state playoffs in 2011 and 2012, they made it to state during Smart’s final two seasons.

Smart said there are no shortcuts to putting winning teams on the field, and he said his message to the players will be to make sure they do something every day to improve themselves.

Smart added that “baseball is a game of failure. The sooner you learn to respond to that, and learn from it and get better from it, the more successful you’ll be.”