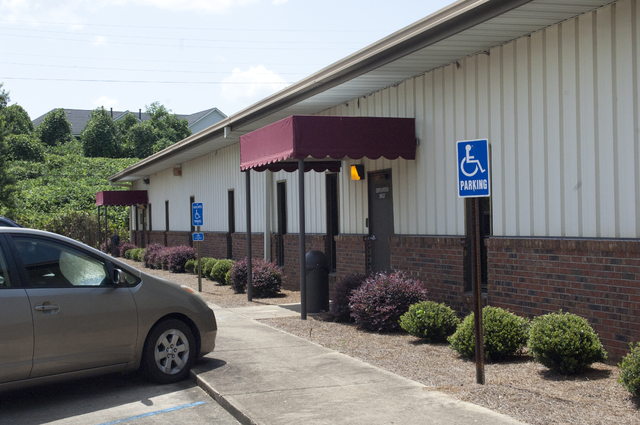 The new District Four Public Health headquarters, currently under construction in downtown LaGrange, is pictured in an architectural rendering. Brigid Smith, right, speaks with an employee of District 4 Public Health last week at the headquarters office on Gordon Commercial Drive in LaGrange. The headquarters is preparing for a move to downtown LaGrange in about 12 months.

http://lagrangenews.com/wp-content/uploads/sites/37/2015/07/web1_0719District4Move011.jpgBrigid Smith, right, speaks with an employee of District 4 Public Health last week at the headquarters office on Gordon Commercial Drive in LaGrange. The headquarters is preparing for a move to downtown LaGrange in about 12 months. The emergency prepareness conference room of the District 4 Public Health Office at the headquarters office on Gordon Commercial Drive. The conference room is used for responding to disasters in a 12-county region.

http://lagrangenews.com/wp-content/uploads/sites/37/2015/07/web1_0719District4Move021.jpgThe emergency prepareness conference room of the District 4 Public Health Office at the headquarters office on Gordon Commercial Drive. The conference room is used for responding to disasters in a 12-county region. The District 4 Public Health Office is housed in this building on Gordon Commercial Drive, where it has been for nearly 30 years. The office will move in about 12 months to a new location in downtown LaGrange.

http://lagrangenews.com/wp-content/uploads/sites/37/2015/07/web1_0719District4Move031.jpgThe District 4 Public Health Office is housed in this building on Gordon Commercial Drive, where it has been for nearly 30 years. The office will move in about 12 months to a new location in downtown LaGrange.

LaGRANGE — Big changes are coming to the District Four office of the Georgia Department of Public Health.

In about a year, the LaGrange-based office, which oversees health departments and Women-Infant Care programs in a dozen counties, will leave the building they’ve leased for nearly 30 years and move into a currently under-construction building in downtown LaGrange.

The nondescript metal building on Gordon Commercial Drive that’s housed the headquarters for decades has served the employees of District Four well for as long as they’ve been there, but Brigid Smith, an administration director at the office, said she’s excited about the upcoming move.

“I think it will be a win-win,” she said. “We’ll be using the downtown restaurants and people will probably join gyms and such. We’re glad to be headed downtown and the (Downtown LaGrange) Development Authority has been very easy to work with.”

The development authority will own the new building, and the state has signed a 20-year lease on the property, which was signed June 29 by the state properties commission, Smith said.

Currently, the 17,000-square-foot building where her office is located doesn’t offer the open space and amenities she’s excited about. The building’s narrow hallways are filled with office chairs and furniture, boxes and supplies and other items waiting to find a home. The corridors twist and turn through the building – to an unfamiliar visitor, it’s easy to become disoriented.

The office is also separated into two different buildings.

“If you want to go get ice or something, you have to go to the other building. … We are very fragmented, so we’re looking forward to streamlining it,” Smith said. “Won’t have so many hallways. We have a lot of wasted space, here.”

The new office downtown, located on the site of the former LaGrange Fire Department headquarters, will be smaller than the current building, but that doesn’t bother Wendy LeVan, District Four’s director of nursing and clinical services.

“We’re all very excited,” LeVan said. “I think one thing I’m looking forward to is just to have a newer, more efficient office space and the ability to communicate better among ourselves. We’re kind of spread out here.”

The new building’s smaller footprint may also save on utility costs. Because many of the office’s employees often work outside of the office and out-and-about in the county, not everyone will need a cubicle or office space, Smith said.

About 50 people work in the office, Smith said. They handle all sorts of day-to-day tasks of the headquarter office.

“We have mostly program coordinators, administration and finance (here),” LeVan said. “They handle all of our billing and coding. Also, our emergency preparedness (team) is here.”

Out of the 12 counties the employees administer, Troup does not have the largest population. That may seem strange, but LeVan said that goes back more than half a century.

“Back in 1954 or so, there was legislation that established the districts in the state, and at that time, they located the district offices in the counties with the highest populations,” she said. “Things have changed, but that’s how it came to be.”

The times have changed for District Four — and will continue to change. But LeVan and Smith both agree that’s a good thing.

“I think it’ll also be a lot easier access for the rest of our counties that come into our district office periodically for meetings,” LeVan said. “That way they don’t have to travel through downtown and come all the way out here (to the industrial park). There’s much less choice of restaurants out in this direction than there are downtown. Also, we try to live what we promote, and we promote wellness, so I think all of our employees are looking forward to being able to walk to places.”

Anyone who would like more information about District Four Public Health may visit www.district4health.org.