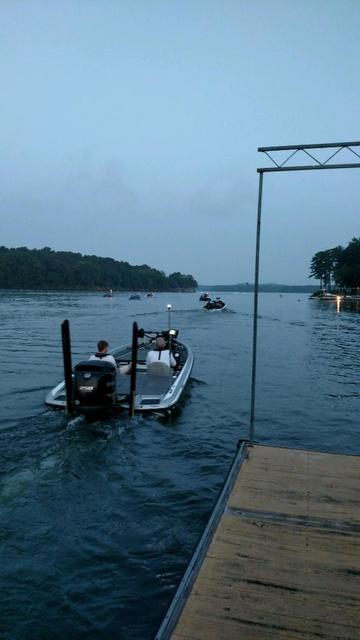 Boats head out early Saturday morning at the Highland Marina for the first annual Jimmy Edge Memorial Fishing Tournament. A total 24 participated. The event benefited the Emmaus Shelter, which helps homeless men, women and children in the area.

http://lagrangenews.com/wp-content/uploads/sites/37/2015/07/web1_WEB0720Emmaus1.jpgBoats head out early Saturday morning at the Highland Marina for the first annual Jimmy Edge Memorial Fishing Tournament. A total 24 participated. The event benefited the Emmaus Shelter, which helps homeless men, women and children in the area.

LaGRANGE — At the crack of dawn Saturday morning, it was every man and team for themselves at Highland Marina for the inaugural Jimmy Edge Memorial Fishing Tournament.

Fishermen took to the water in 24 boats with hopes of returning with the biggest catch of the day.

The tournament, which organizers hope will become an annual event, provided a day out on the water for participants and also raised money for the Emmaus Shelter through entry ticket sales and a raffle. The shelter helps homeless men, women and children in the local area.

“Clients of the Emmaus Shelter joined fishing professional Ken Bearden for three days asking LaGrange to step up (for the event),” said Emmaus Shelter Executive Director Jessica David. “Every $5 purchase will help us make sure another homeless person is fed, clothed and sheltered, just like the Bible tells us to. So much was raised from the raffle that we can’t help but send up a cry of thanks for each individual who stopped to care for another individual.”

David said the idea for the tournament came up as organization members were thinking of new ways to expand their mission to include men and their children. Currently, the Emmaus Shelter can only house women and children, but soon may sign a deed to the Matthews Building on Hill Street at Youngs Mill Road. The building is expected to become a transitional center for area men.

“So often fathers and sons fish together,” said David. “Jesus also taught us to be ‘fishers of men.’ This was the perfect inaugural event to establish funding for our expanded mission. Ken Bearden, the 24 boats and all the folks who donated and bought raffle tickets have encouraged the guests and staff of Emmaus to keep the faith … and continue teaching the men to ‘fish.’”

The Emmaus Shelter also awarded prizes for the fishermen who caught the biggest fish, plus raffle prizes.

More than $2,400 was awarded in the inaugural tournament, David said, plus a YETI cooler, shotgun and more.

The total amount of money raised for the shelter at the event was not available at press time.