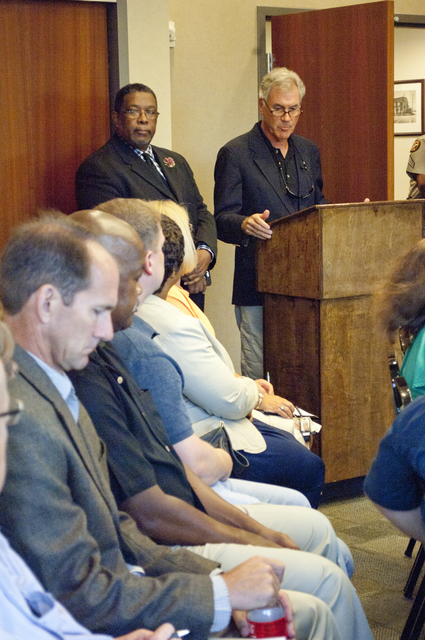 LaGRANGE — Some people don’t like the idea of a race reconciliation program in Troup County, and the proposal’s endorsers know it.

Wolfe, who is white, made the comment while speaking to county commissioners Friday, pitching his program during their work session. He and his counterpart, former state Rep. Carl Von Epps, who is black, are trying to start a dialogue on what they call the long and under-rug-swept history of racism in Troup County.

“People have said that we have no race problem in Troup County — that we either have a gang problem, or a public education problem, or an economic development problem, but we have no race problem,” Wolfe told commissioners. “People have said, ‘This is a big problem, Ricky, but you shouldn’t be talking about it because it’s going to make it worse.’ (They’ve said) that just because you’re talking about it, it’s going to drive industry away from Troup County because this is something we need to keep in our family closet and not discuss.”

Still, Von Epps and Wolfe are unwavering. They’ve addressed the three city governments in Troup County, which have collectively pledged $100,000. LaGrange College, which Wolfe said would act as the “hub” of the program, has also pledged the use of its facilities and an additional $10,000.

The aim of the program is simple: build trust between blacks and whites, Von Epps said.

“Truth be told, we have a problem,” he said. “Not only is it a racial divide, it’s an economic divide and a cultural divide. Truth be told, there’s a spiritual division here. … Our hope is to bring people together — it’s a trust building effort.”

The program, which has yet to be named or even legally incorporated in any way, is already underway. In March, 40 participants who included law enforcement officers, mayors, pastors and nonprofit leaders met for a two-day session at LaGrange College. The first day, they convened over dinner; the next day, they returned for an all-day session that included open discussion on the group members’ experiences and views on race and the its relation to Troup County.

“A big part of this has to do with telling stories having to do with events that have happened in a person’s life in their past that have led them to form an opinion about the way the world works,” Wolfe explained.

Over the next 18 months, roughly 200 other Troup residents may have the opportunity to engage in that kind of dialogue — if everything goes according to Von Epps’ and Wolfe’s plans.

Right now, that initial group of 40 people will make up what they’re calling the “core group.” Those 40 people will choose the next 40 participants, who, after they’ve completing they training, will choose the next 40, and so on. The sessions are slated to be held quarterly during the next year and a half, and they will eventually result in a next level where dozens of participants may return for more dialogue.

The whole program is based on a nonprofit in Richmond, Virginia, called “Hope In the Cities.” Founded more than two decades ago, the program bills itself as “a sustained citizen-led effort (that) has resulted in a network of leaders in nonprofit and business sectors, local government, media and education. It engages people across the political spectrum and of all cultural and religious backgrounds.”

Wolfe and Von Epps both said they have their work cut out for them.

“We have also received letters that are some of the most hateful, disrespectful things said about another human being that you can imagine,” Wolfe said.

“The other side, we have had many, many, many of our people to say, ‘I don’t know what this is about, but I’m happy that you are addressing this issue and I want to be a part of it,’” he said. “We have a list of countless names – black and white, young and old, different educational levels, different economic status – in this community that want to participate in this program, which will be starting in September.”

Some of Wolfe’s most vocal critics have accused him and Von Epps of attempting to gain or profit from the initiative.

To that, Wolfe responded:

“We (Wolfe and Von Epps) have been asked and accepted this role. We are in no way compensated for the work that we’re doing. We have no plans to be the king, no plans to be the leader, we’re just trying to get something off the ground that we feel strongly about. Another thing about us is that we are free from the position (of elected office). We as citizens have the right to participate in anything that we feel like would help our community.”

As far as the $110,000 of pledged funding for the program goes, Wolfe said a third-party nonprofit will manage the funds in the meantime. If the program gets off the ground, a nonprofit organization could be established to raise future funds and manage them.

The money will be used for outreach, and eventually the cost of sending four of five local people for training in Richmond so that the program can be independently run in Troup County and not rely on contractors, Wolfe said.

For Von Epps, the program is about more than funding, though.

“As a state representative, I had the opportunity on many occasions to go through the state budget,” he said. “… If you’ve ever reviewed the state budget, or even the federal budget, you’ll see that we (the government) fix things. We fix potholes, and so what I suggest is that we have a pothole in our human capital here in LaGrange.”

Likewise, Wolfe is aiming to solve what he said is a “serious problem” in Troup County, and he doesn’t much care that some people have sent him angry letters.

“Just the fact that it has created this outpouring of emotion tells us that we are on the right page,” he said. “What it also does for all of us that are involved in this is it gives us more enthusiasm and momentum to do this work, so that people who have been so critical of this in an attempt to stop it, all that’s really done has given us more energy to do what we want to do. They’re going to be very disappointed that the outcome that they wanted is going to to be the opposite of (what) they expected.”