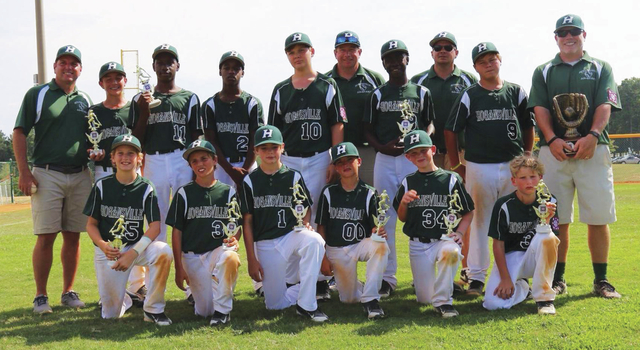 Hogansville’s Will Alford follows through on his home-run swing on Sunday against Albany. Contributed photo

http://lagrangenews.com/wp-content/uploads/sites/37/2015/07/web1_7-20-hogansville5.jpgHogansville’s Will Alford follows through on his home-run swing on Sunday against Albany. Contributed photo AUGUSTA – Their final-four stay couldn’t have started any worse.

Facing Troup National in the opening game of the semifinals of the Dixie Youth Baseball 11-12-year-old state tournament, Hogansville was thumped 13-1 on Friday.

Fortunately for Hogansville, it was a double-elimination format, so the loss didn’t mean the end of its tournament stay.

Hogansville came back later on Friday and crunched Norcross 18-3 in an elimination game.

“We went up there prepared for a hard-fought game against Troup on Friday, and Troup just punched us in the mouth,” Hogansville coach Scott Thompson said. “They just took it to us. We could have folded up the tent, called it a tournament, but we came back Friday night and beat Norcross 18-3, and gained some of our momentum back.”

That win over Norcross set up another game with Troup National on Saturday, with the winner of the game earning the right to play Albany for the state championship.

Hogansville faced a 4-2 deficit heading to the sixth and final inning, but it rallied for three runs to win 5-4.

The game ended when Nate Lee walked with the bases loaded to bring Will Alford in with the winning run.

That win put Hogansville in the championship round against Albany on Sunday.

“We came back and really played a great game against Troup,” Thompson said. “It was a hard-fought game. It was good that we won, but it was tough the way Troup lost with walking in the winning run. That was tough. To their credit, a lot of their fans came out and supported us (against Albany), a lot of their parents. And that was awesome.”

Because Albany was unbeaten, Hogansville needed to win two games on Sunday to claim the state title.

In the first game, Hogansville overwhelmed Albany 12-2, setting up a winner-take-all game.

Unfortunately for Hogansville, its hopes for a state title were dashed when Albany won 9-1.

“We felt good, and then we come out today and really just put it to Albany in that first game,” Thompson said. “We were on them from the start, and we beat them 12-2.”

In the second game, Thompson said “a couple of things happened that didn’t go our way, and we didn’t figure out this lefty they had on the mound for four innings. He was just not allowing us to square the ball up like we did in that first game.”

Hogansville was denied the championship, but it was still an enormously successful summer that included a district title and a second-place showing at state.

“It was difficult, but we should still hold our heads high,” Thompson said. “We’re the second-best team in the state.”

In Sunday’s first game against Albany, Chase Williams got the complete-game victory, and Demetrius Coleman led the offensive effort with two home runs.

Nobody did it better