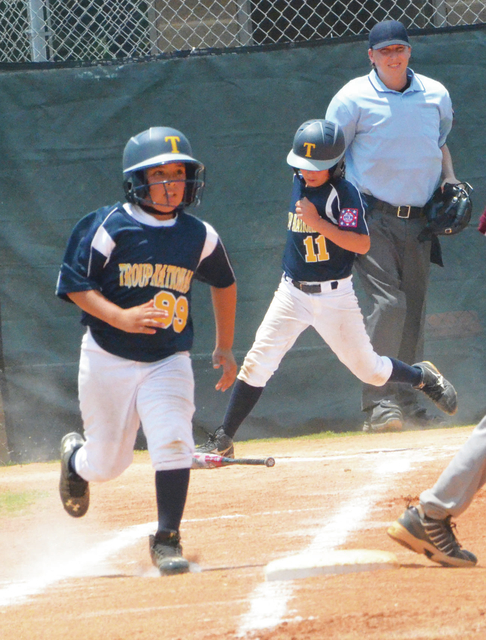 Troup National’s Trevor Booton makes his way toward first base after getting a big hit while assistant coach Ricky Cook celebrates during Saturday’s win over Perry. Booton had a pair of two-run doubles in a 12-run fifth inning. Kevin Eckleberry | Daily News

http://lagrangenews.com/wp-content/uploads/sites/37/2015/07/web1_7-20-coach.jpgTroup National’s Trevor Booton makes his way toward first base after getting a big hit while assistant coach Ricky Cook celebrates during Saturday’s win over Perry. Booton had a pair of two-run doubles in a 12-run fifth inning. Kevin Eckleberry | Daily News Troup National’s Ty Medders makes his way toward first base after getting a hit on Saturday. Kevin Eckleberry | Daily News

http://lagrangenews.com/wp-content/uploads/sites/37/2015/07/web1_7-20-troup3.jpgTroup National’s Ty Medders makes his way toward first base after getting a hit on Saturday. Kevin Eckleberry | Daily News

MANCHESTER – It was an unusual position for the Troup National all-stars.

Throughout its tournament run this summer, Troup National hadn’t faced a whole lot of opposition, and it headed into Saturday’s game against Perry with an 8-0 record in the Dixie Youth Baseball 9-10-year-old district and state tournaments combined.

As Troup National came to bat in the bottom of the fifth inning, though, it found itself trailing by two runs.

While the players hadn’t faced much adversity as members of the Troup National team, though, they’d been in plenty of sticky situations before.

Nine of the 12 players on the team are members of the same travel-ball team, and they’ve faced some tremendous competition over the years, and they’ve seen plenty of deficits.

Troup National shrugged off that two-run deficit and scored a whopping 12 runs in the bottom of the fifth inning to win 12-2.

Troup National almost surely would have kept on scoring runs, but the game ended because of the run rule.

On Sunday, Troup National beat Perry again, this time by a score of 7-3, to wrap up the state championship and earn an invitation to the Dixie Youth Baseball World Series.

The state tournament began with 15 teams, and it was narrowed down to the three teams that won their respective pools.

In the 12-run inning against Perry, Troup National sent 16 batters to the plate, and there were 12 hits, three walks, and a hit batter.

By the time Troup National won it by the run rule, Perry had yet to record an out in the inning.

Reed Morris followed with an infield single to bring in another run.

T.J. Wilkerson singled and Jesse Swann walked, and after a pitching change, Colton Esposito walked before Devon Murphy knocked in a run with a base hit.

Medders, up for the second time in the inning, had an RBI single, and Cook followed with a base hit to drive in two more runs, and the lead was 12-6.

Garner was then hit by a pitch, and Booton followed with his second two-run double of the inning, and Troup National led 14-6.

Morris walked, and Wilkerson and Swann ended the game with back-to-back RBI singles.

Troup National took a 1-0 lead on an RBI single by Medders in the first inning, but Perry scored three runs in the third inning to go up 3-1.

Troup National got one of those runs back in the third inning.

With two outs, Swann and Esposito singled, and C.J. Stephens knocked in a run with a base hit to make it a 3-2 game.

Troup National took the lead with a pair of runs in the fourth inning.

With the bases loaded, Swann walked to drive in a run, and Esposito reached on an infield single to bring in the go-ahead run.

Perry answered with three runs in the top of the fifth to take a 6-4 lead, but Troup National stormed back in the bottom of the inning to win it.

Cook got the start for Troup National and pitched into the fifth inning, and Murphy got the final two outs in that inning and was the winning pitcher.

There was no drama in Saturday’s early game, with Troup National easing to the 13-0 win over Bleckley County.

Murphy had a pair of doubles for Troup National, and Swann, Esposito, Medders, Cook, Booton and Morris all had hits.

Esposito was the starting and winning pitcher.