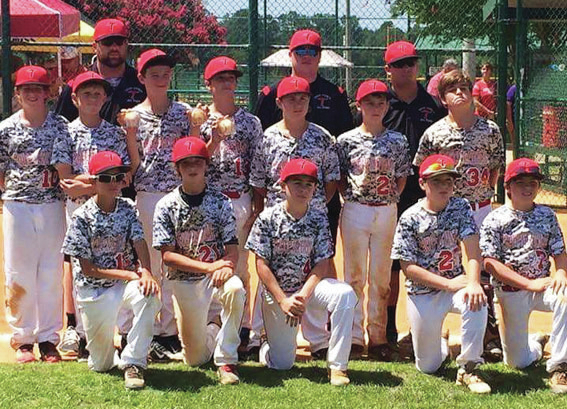 AUGUSTA – After losing their first game in the Dixie Youth Baseball state tournament, the Troup National 11-12-year-old all-stars had their backs against the wall.

They returned to the field later in the day knowing they had to win, or their season would be over.

Troup National came back and overwhelmed Buford 9-1, and the team beat Wrens 11-3 the following day to finish second in its four-team pool and advance to the final four.

Troup National was back in Augusta last weekend for the final four, and it ended up finishing third in the state.

While the team was obviously hoping to finish first and advance to the World Series, it was still a tremendous tournament run for head coach Andrew Caraway’s team.

Caraway said he was most proud of the way the team bounced back from a 3-1 loss to Albany in the first game of the state tournament.

In the final four, Troup National opened with a bang with a 13-1 win over Hogansville.

On Saturday, Troup National lost to Albany 8-0, setting up an elimination game against Hogansville.

Troup National had the lead heading to the final inning, but Hogansville rallied for three runs in the sixth inning to win 5-4.

It was a heart-breaking way to end the season, but it was still a successful summer, and Caraway said it was a team effort.

“Everybody contributed, from one through 12,” Caraway said. “The pitching, defense, offense, it was great to see them come together like that.”

As an example of how everyone contributed, Caraway noted how outfielder Ethan Thompson entered the game as an outfield sub in a game on Saturday and made a stellar play.

“He was in right field, and he threw someone out at third base,” Caraway said. “The bench erupted when that happened. It was amazing to see him rise up and make a play like that, and do his job.”

Caraway figured the pitching would be the strength of the team, and it was.

“The pitching really carried us,” he said. “Colton Webb, Dawson Wright, Justin Truett and Ethan Morton all were really vital to us making a deep run like this. Pitching was going to carry us, and eventually the offense caught up. We finally got some bats on the ball, and finally got some runners on base.”