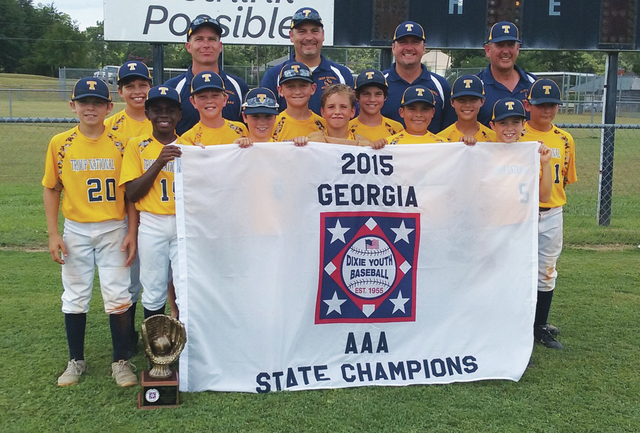 MANCHESTER – Now that’s how you take care of business.

With Sunday’s 7-3 victory over Perry in the championship game of the Dixie Youth Baseball 9-10-year-old state tournament, the Troup National all-stars continued what has been a phenomenal run this summer.

Troup National improved to 10-0 in the district and state tournaments combined, and it has outscored its opponents by a combined score of 146-20.

Troup National will try to keep the good times rolling when it heads to South Carolina for the Dixie Youth Baseball World Series that kicks off on Aug. 1.

The two teams met for the first time on Saturday, and while Troup National won 16-6, Perry had a 6-4 lead heading to the bottom of the fifth inning.

In Sunday’s rematch, Perry hung around, but Troup National walked away with a 7-3 win to sew up the state championship.

The four-run margin of victory was Troup National’s smallest in tournament play this summer.

“That was a great, great baseball team,” Troup National coach Danny Swann said of Perry. “In all honesty, I’m glad they’re not going to the World Series. I wouldn’t want to have to face them again.”

Perry scored two runs in the fifth inning on Sunday to get within a run, but Troup National was unbothered and it responded with three runs in the bottom of the fifth to reclaim control.

“One of the things we did well was we’d stumble, but we’d have somebody come in and make a tremendous play,” Swann said. “That was huge. That was the difference in this baseball team and that baseball team. Every time we made a mistake, we had somebody right there behind them to come and make a great play.”

Colton Esposito was Troup National’s starting pitcher on Sunday, and he pitched the first five innings to get the win.

Trey Cook, the starting pitcher on Saturday against Perry, finished things off with a scoreless sixth inning.

Troup National got off to a quick start with two runs in the bottom of the first.

Jesse Swann, Troup National’s leadoff hitter, got a pitch he could handle, and he drove it over the outfield fence for a home run to make it a 1-0 game.

Two batters later, Devon Murphy singled, and with two outs, Cook came through with an RBI single to give Troup National a 2-0 lead.

Perry got one of those runs back in the top of the third, but Troup National scored twice in the bottom of the inning to extend the lead to 4-1.

Seth Stargell got things started with a walk, and Preston Pressley followed with a bunt single.

C.J. Stephens moved both men up a base with a sacrifice bunt, and Jesse Swann followed with an RBI single.

Esposito then reached on an error to bring in another run, giving Troup National a three-run cushion.

It remained a 4-1 game until the top of the fifth when Perry scored twice, but Esposito did some nice work on the mound to keep Troup National ahead by a run.

Troup National, just as it did in the third inning, came right back and put runs on the board after Perry scored.

T.J. Wilkerson began the rally with a walk.

Stargell came into the game as a pinch-runner and moved up two bases on wild pitches, and he scored on a groundout by Swann.

After Esposito reached on a bunt single and Murphy had a base hit, a sacrifice fly by Ty Medders drove in another run.

Cook then capped the rally with an RBI single, giving Troup National a 7-3 lead.

Armed with a four-run lead, Cook went to the mound in the top of the sixth and retired Perry in order, and the celebration was on.