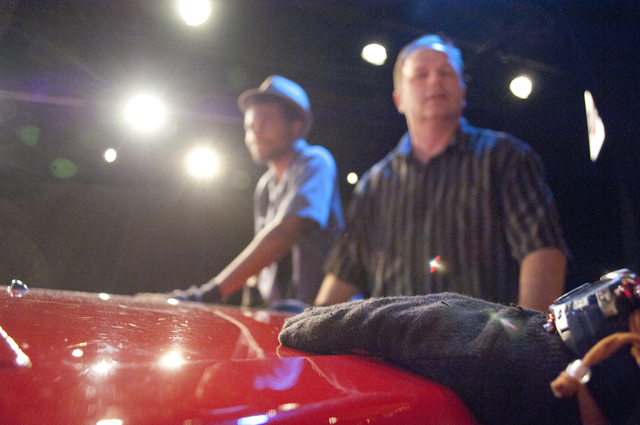 Antoine Bray, left, rehearses Monday for the musical ‘Hands on a Hard Body’ at the Lafayette Society for Performing Arts on Bull Street in LaGrange. The musical opens Thursday.

http://lagrangenews.com/wp-content/uploads/sites/37/2015/07/web1_0721HardBody012.jpgAntoine Bray, left, rehearses Monday for the musical ‘Hands on a Hard Body’ at the Lafayette Society for Performing Arts on Bull Street in LaGrange. The musical opens Thursday. Actors rehearse Monday for the musical ‘Hands on a Hard Body’ at the Lafayette Society for the Performing Arts on Bull Street in LaGrange. The musical opens Thursday.

http://lagrangenews.com/wp-content/uploads/sites/37/2015/07/web1_0721HardBody022.jpgActors rehearse Monday for the musical ‘Hands on a Hard Body’ at the Lafayette Society for the Performing Arts on Bull Street in LaGrange. The musical opens Thursday.

LaGRANGE — A car will get you there, but a truck will save your life.

That’s the premise of the Lafayette Society for Performing Arts’ latest musical, “Hands on a Hard Body,” which opens Thursday.

Artistic director Valerie Longshore-Sargent and her cast of 15 have been rehearsing since June, but that’s not all that’s been involved in getting the show ready. A full-sized, 1992 Nissan pickup truck, around which the show is centered, had to be towed in and maneuvered onto the stage of the LSPA Black Box Theater on Bull Street.

“We actually had to take the railing down,” Longshore-Sargent said. “It wouldn’t fit through our loading-dock door, but we were able to get it in — we had to fold the mirrors in, but it fit.”

The play, based on a true story about a struggling Nissan dealership in Texas, takes viewers through two and a half hours and two acts as 10 people vie to win the truck in a contest. There aren’t many rules – just that the contestants have to keep their hand on the truck at all times and the last person standing wins the truck.

The country-rock, PG-13 musical is about more than winning a truck, though.

“The characters come from all socio-economic backgrounds and they’re all desperate to win the truck for one reason or another,” Longshore-Sargent said. “Winning the truck will change their life. I think everyone (who sees the show) will find a commonality with a character.”

One of the show’s actors, 50-year-old John Rains of Harris County, said he’s enjoyed the wide variety of characters in the show – but also interacting with members of the community by acting in the play.

“I’ve really enjoyed spending time with my family and getting to play the different parts, and seeing how they interact with other people in the community,” he said. “Both in the play and also in LaGrange. Most of the people in the play are from LaGrange or Harris County, and it’s nice to get outside your bubble.”

As a career, Rains is an active-duty U.S. Army captain who runs a medical clinic at the infantry basic training program at Fort Benning. He sees a wide variety of people from all walks of life in his clinic, and that experience extends to the show in which he’s acting.

“If you come to the show, you’ll see it’s multicultural, multiracial, certainly multigenerational,” he said. “We’re from all walks of life. None of us are full-time performers. It’s a theater production, but it’s made from people who are part of the community.”

Being a part of the cast – alongside other members of his family – has given him a chance to do something he doesn’t normally get to do, he said.

“For anybody who gets an opportunity to do community theater, they should try it and support their theater,” Rains said. “This give people an opportunity to open up a world they’re not used to. It certainly adds a richness to the community. You don’t have to go to Atlanta to see a good show, you can get it right here in LaGrange.”