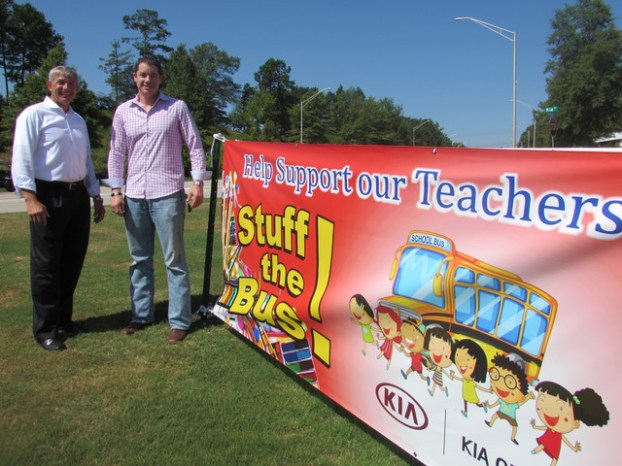 John Gerdeman, general sales manager of the Kia of LaGrange dealership, left, and Dale Jackson, vice president of Jackson Heating and Air, stand next to a banner for Stuff the Bus, a campaign they are leading. The campaign runs through July 31 and seeks businesses and people in the community to buy school supplies for teachers and students in schools around Troup County.

http://lagrangenews.com/wp-content/uploads/sites/37/2015/07/web1_WEB0722stuffthebus12.jpgJohn Gerdeman, general sales manager of the Kia of LaGrange dealership, left, and Dale Jackson, vice president of Jackson Heating and Air, stand next to a banner for Stuff the Bus, a campaign they are leading. The campaign runs through July 31 and seeks businesses and people in the community to buy school supplies for teachers and students in schools around Troup County.

In just a few weeks, teachers and students will be heading back to the classroom.

But many may not have all the supplies and materials they need for a successful start to the school year.

Throughout the month of July, Kia of LaGrange on Lafayette Parkway and Jackson Heating and Air are helping teachers and students start the year on the right foot. The two businesses have been collecting school supplies for a special event called Stuff the Bus.

“It’s not all about what the kids do and don’t have,” explained John Gerdeman, general sales manager at the Kia dealership. “It’s more about what the classrooms (in Troup County) need that the county (school system) doesn’t provide … items that teachers will have to pay pay out of their own pockets.”

“We’re addressing a problem instead of complaining about it,” explained Dale Jackson, vice president of Jackson Heating and Air. “We’re being proactive and doing something about it. We’re taking our money and doing it – not creating another bureaucracy. We’re doing it ourselves and going straight to the problem and trying to solve it.”

Gerdeman said some of the supplies teachers buy with their own money include backpacks, small dry erase boards, expo markers, pencils, notebook paper and more.

The two men are also looking for gift cards from the “Teachers Pay Teachers” website, a place where educators can go to download study guides, test materials and other educational curriculum for a fee.

The two companies – along with other businesses like General Family Dentistry with Dr. John Vollenweider – are working with Loy’s Office Supplies in LaGrange to help gather all the items together. They are hoping more businesses and people in the community will also help out as they start to shop for their children’s back to school supplies.

“We feel like the Kia dealership is a great corporate sponsorship,” said Jackson. “We like to show ways we can work together, not just on a personal level, but as a business, and take care of our community.”

Jackson said businesses can call Loy’s and place a bulk order for supplies. In turn, Loy’s will charge the company and then deliver the items to the bus outside the Kia dealership that will deliver the much needed supplies to teachers and schools around Troup County.

“Let’s fill the bus up and divide it up amongst the schools and classrooms,” said Randy Jackson, internet sales manager at the Kia dealership of LaGrange. “It’s for the kids … without (supplies), it affects their learning and their whole day.

“It would be nice to do something every year with collecting these donations,” Jackson continued. “Let the teachers teach and not worry about the budget.”

Anyone interested in helping the Stuff the Bus campaign and wants to purchase items in bulk can call Loy’s Office Supplies in LaGrange at 706-884-1723. Folks who just want to donate a few items can either drop them off at the Kia dealership, 1217 Lafayette Parkway, or Jackson Heating and Air at 1411 Whitesville St.

Anyone who wants more information on Stuff the Bus may call Kia of LaGrange at 706-298-5024 and ask for Randy Jackson or John Gerdeman.

Stolen vehicle chase on I-85 ends with wreck in Hogansville