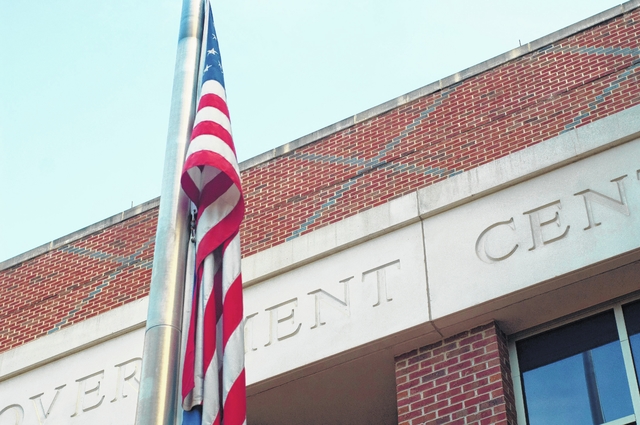 An American flag at the Troup County Government Center, along with all other government buildings in Georgia, will remain at half-staff until Thursday for the victims of a shooting at a military recruiting center in Tennessee on Thursday.

http://lagrangenews.com/wp-content/uploads/sites/37/2015/07/web1_FlagCMYK.jpgAn American flag at the Troup County Government Center, along with all other government buildings in Georgia, will remain at half-staff until Thursday for the victims of a shooting at a military recruiting center in Tennessee on Thursday.

LaGRANGE — Flags of the United States and Georgia will fly at half-staff at all government buildings in Troup County and across the state until sunset Thursday following an executive order signed Tuesday by Gov. Nathan Deal.

The move comes after two Georgians — Marine Lance Cpl. Skip Wells, 21, of Marietta, and Navy Petty Officer 2nd Class Randall Smith, 26, of Rossville — were killed by a gunman Thursday at a military recruiting station in Chattanooga, Tennessee. Three other Marines were also killed in the attack. Police shot and killed the gunman, Mohamad Youssef Abdulazeez, 24, during the assault.

County Commission Chairman Patrick Crews said he received calls from Troup residents Tuesday asking why the flags at Troup government buildings had not been lowered. Just as county staff were researching the U.S. flag code to learn if they could order the flags lowered, they received Deal’s executive order.

“Our county needed to do our part in recognizing their sacrifice,” Crews said of the slain service members.

President Barack Obama also issued an order Tuesday to lower the White House flag to half-staff in remembrance of those killed, following similar moves at the U.S. Capitol and even by Republican presidential candidate Donald Trump.

In other business Tuesday, county commissioners voted during their regularly scheduled meeting to approve a request by Juvenile Court Judge Michael Key for additional funding to hire an attorney for indigent representation.

Key requested $30,000 to hire one attorney to represent indigent third parties, such as low-income grandmothers, in custody and other juvenile court proceedings. Previously, the Public Defenders Standards Council provided the funding, but ceased the program July 1.

Millage rates are used by the county to calculate property taxes.

The total taxable value of a home is set by the tax commissioner’s office and may be appealed by a resident.