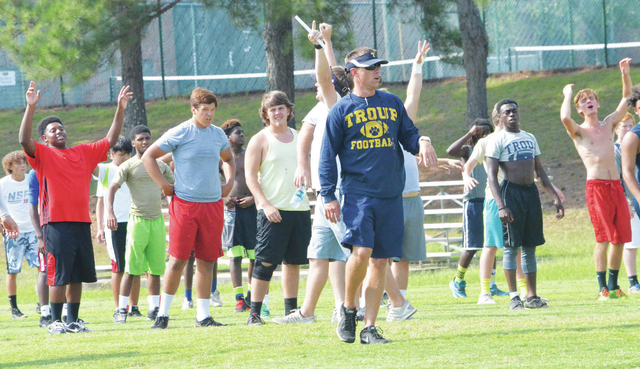 Troup head coach Tanner Glisson leads his players at the start of practice on Tuesday. Troup will face another team for the first time on Aug. 13 when it hosts Spencer. Kevin Eckleberry | Daily News

http://lagrangenews.com/wp-content/uploads/sites/37/2015/07/web1_7-22-troup8.jpgTroup head coach Tanner Glisson leads his players at the start of practice on Tuesday. Troup will face another team for the first time on Aug. 13 when it hosts Spencer. Kevin Eckleberry | Daily News

Usually, high-school teams in Georgia only have one preseason game before playing their regular-season opener.

Troup, though, will play two preseason games before opening its season on Aug. 28 against LaGrange.

Teams are allowed to play two preseason games if they don’t have a spring practice, and Troup didn’t practice in the spring while the search for a new head coach was ongoing.

Tanner Glisson was eventually brought in as the Troup head coach, and he was able to line up two preseason games for his team.

First up, Troup will host Spencer in a preseason game on Aug. 13, with kickoff set for 7 p.m.

The following week on Aug. 20, Troup will be back at Callaway Stadium, this time for a preseason game against Upson-Lee.

Troup will then jump into a new season against LaGrange as it looks to win a third straight game in the rivalry.

Troup will play a total of five non-region games before beginning its Region 5-AAAA schedule on Oct. 9 against Woodward Academy.

A year ago, Troup went 3-2 in non-region play, and that included victories over LaGrange and Callaway.

Troup was unable to get a win in region play, though, and it finished at 3-7.

It was an extremely challenging schedule a year ago, and nothing has changed this season.

“Almost everybody on our schedule has a Division I commitment,” Glisson said.

That includes Woodward Academy, which features a running back in Elijah Holyfield who is one of Georgia’s top recruits.

“Georgia just told him he’s their number one running back,” Glisson said.

Because Glisson didn’t get started working with the players until June, Troup has been playing catch-up, but the new coach said there are no excuses.

“Nobody’s going to feel sorry for us,” Glisson said. “It is what it is, and we’re just trying to make the best of it right now.”