Callaway gears up for new season 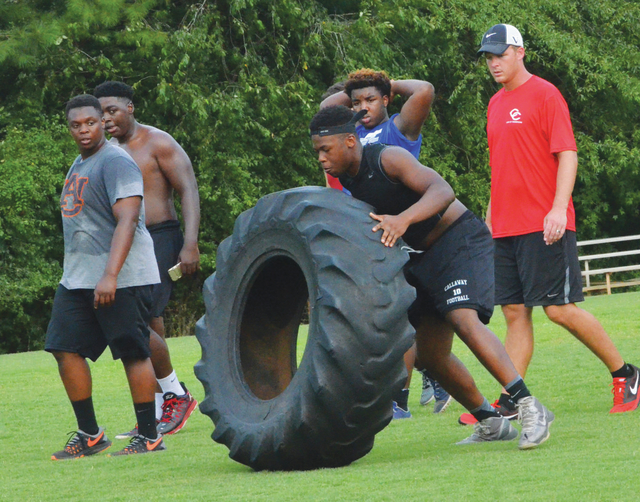 The tire flip was part of Callaway’s Ironman competition that concluded on Wednesday. Callaway opens its season on Aug. 21 against LaGrange. Kevin Eckleberry | Daily News

In a little more than three weeks, the Callaway Cavaliers will be in Hogansville to take on Greenville in a preseason game, and they’ll open their season on Aug. 21 against LaGrange.

The preparation for a new season is continuing this week for the Cavaliers, who are making the transition from their summer program to preseason practice.

On Wednesday, the Cavaliers completed their Ironman competition, and that leads into the start of preseason practice.

According to the Georgia High School Association calendar, the first official day for preseason practice is Saturday, and teams can begin holding full-contact practices on Aug. 1.

Pete Wiggins, who is heading into his 11th season as Callaway’s head coach, said this week always signifies to the players how close a new season is actually getting.

“It’s the same time frame every year,” Wiggins said. “It’s the youth camp (that was held Tuesday), and the Ironman competition, and it’s not far away from the scrimmage in Hogansville.”

There were also weight-lifting events, a 40-year dash, lane touches, and other competitions designed to test the skill and fitness level of the players.

“It’s great to see them out working,” Wiggins said. “We’re just trying to do better on each lift, or each competition. It tells a lot about our kids when they get out here and compete. They want to do better.”

Callaway has had a busy summer that included seven-on-seven events at Auburn, the University of Georgia and West Georgia University, and the players participated in a number of position camps.

Callaway’s players also had daily workouts at the school.

Working hard in the summer sun