Future Cavaliers take to the field 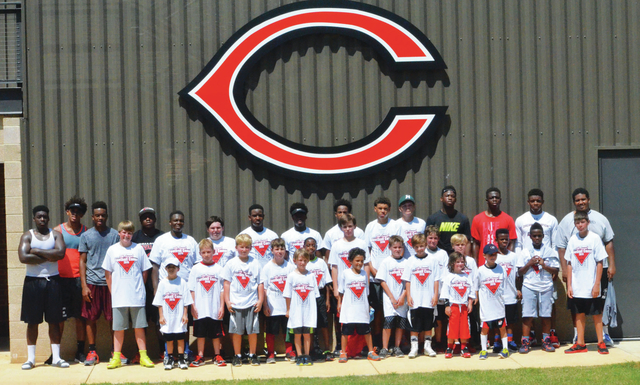 Some of the participants in the Pete Wiggins football camp run a play at the Callaway High practice field. Kevin Eckleberry | Daily News

http://lagrangenews.com/wp-content/uploads/sites/37/2015/07/web1_7-22-camp51.jpgSome of the participants in the Pete Wiggins football camp run a play at the Callaway High practice field. Kevin Eckleberry | Daily News Some of the older campers run a play while Callaway coach Terry Hayes looks on in the background. Kevin Eckleberry | Daily News

http://lagrangenews.com/wp-content/uploads/sites/37/2015/07/web1_7-22-camp41.jpgSome of the older campers run a play while Callaway coach Terry Hayes looks on in the background. Kevin Eckleberry | Daily News HOGANSVILLE – Dre Martin rolled out, looking for an open receiver as the defense closed in on him.

That scenario is nothing new for Martin, who spent the first five games of the 2014 season as Callaway’s starting quarterback.

On Tuesday morning on Callaway’s practice field, Martin once again found himself running an offense and trying to move the ball down the field, but the stakes were a bit different, and the opposition wasn’t quite as stern.

Martin was one of a handful of Callaway players who was helping out at the sixth edition of the Pete Wiggins football camp.

Martin, who’ll be a senior on this year’s team, was glad to be a part of the event.

‘You’ve got to give back to the community, to the little kids,” Martin said. “I love it. They’ve got tons of energy.”

Wiggins, who is heading into his 11th season as Callaway’s head coach, has always made a point of inviting his players to be a part of the camp, and he said they do a tremendous job.

“It’s our sixth year of the camp, and it was another great turnout,” Wiggins said. “Obviously it’s a lot of fun for the kids that come to it, but I enjoy seeing our high-school kids working the camp as much as I enjoy seeing our young kids out here. They have a ball with it. I’m real proud of the older kids that come out and help with it. I think it’s a great learning experience for them down the road.”

As for Martin, Wiggins said he “was a great leader today. He ran several of the drills, and I could tell the kids were really following him. He did a great job today.”

“That’s one of the best job the players have ever done,” Hubbard added. “They were very active, running around with them and working hard. I was proud of the way those guys interacted with the younger guys.”

In addition to the players helping out, most of Callaway’s coaches were also on hand.

“Our coaching staff is getting older, but I feel like on a day like today we’re like a bunch of kids,” Wiggins said. “It’s a lot of fun for the kids participating, but for the coaches, too. We enjoy it.”

Hubbard, Callaway’s defensive coordinator, said it’s always enjoyable for the coaches to get to spend time with their kids.

“It is fun to get to coach your kids like that, and it’s fun for them,” Hubbard said. “It’s neat. As they grow up, you take advantage of the times like that.”

Hubbard added that “we try to keep our boys around as much as we can. We’ll bring them to practices and everything. They enjoy playing each other because they’re all around the same age.”

It was a typically hot day on Tuesday, but since the camp began at 9 a.m. and ended at noon, the heat wasn’t a big deal, and Wiggins made sure the campers got plenty of water.

“It’s a hot day, and we took a lot of breaks and hydrated the kids,” Wiggins said. “I think they enjoyed it, and we look forward to doing it again next year.”