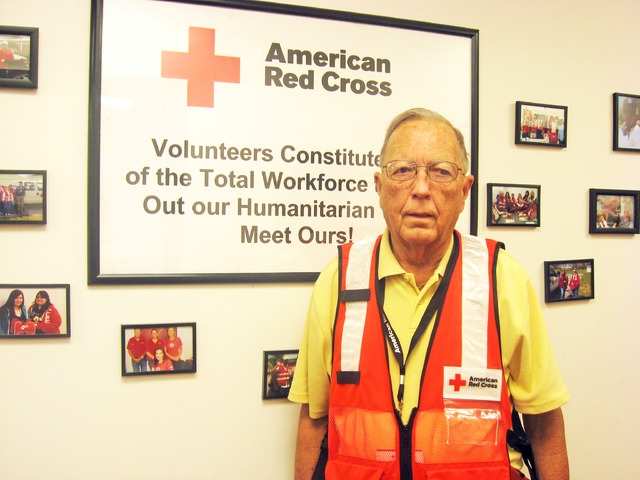 Doodle Eubanks, a volunteer with the local chapter of the American Red Cross, stands in the local American Red Cross office in this May 2014 file photo. This summer Eubanks has been deployed twice to Texas to care for folks after massive floods swept through some areas and to Illinois after severe weather knocked out power and displaced families for several days.

http://lagrangenews.com/wp-content/uploads/sites/37/2015/07/web1_DoodleEubanks1.jpgDoodle Eubanks, a volunteer with the local chapter of the American Red Cross, stands in the local American Red Cross office in this May 2014 file photo. This summer Eubanks has been deployed twice to Texas to care for folks after massive floods swept through some areas and to Illinois after severe weather knocked out power and displaced families for several days.

LaGRANGE — Doodle Eubanks has done a lot of traveling this summer, but not all of it has been a vacation.

So far, the local American Red Cross volunteer has been deployed three times – twice to Texas to help folks recover after the tumultuous flooding that churned through parts of the state. The first time he flew in to Austin, and was stationed in many small towns including Wimberly, Texas.

“Wimberly was the hardest hit,” Eubanks said. “That’s where a family a four was washed away while on vacation. The water was so strong, it stripped the bark off the trees. It came over one of the bridges … the bridge was 40 feet off the ground. For a few days, Blackhawk helicopters were having to bring people over the bridge to our emergency shelters.”

Eubanks opened three American Red Cross emergency shelters in that area, was a shelter manager and supervisor, and closed six shelters down when they were no longer needed. He spent more than a month in Texas caring for total strangers during their darkest hours.

The Manchester man said just three days after he returned from that trip at the end of June, he flew back out to Texas – this time to Houston – to run an emergency shelter for folks displaced by more flooding.

Eubanks is already on the road again – volunteering his time in Wateska, Illinois, helping families get back on their feet after severe storms ripped through the area on Sunday causing major flooding, damage and power outages from high winds.

“I got the assignment on Monday around 10:30 a.m. and flew out early Tuesday morning to Chicago, then drove 100 miles south of Wateska,” he said.

This time, he is in the field handling client casework and helping folks transition out of the Red Cross emergency shelters. He’s been a volunteer for almost five years.

“I just enjoy it,” Eubanks said of all his volunteer work. “It gives me a chance to see the country, and I feel like I am helping people too.”

Connie Hensler, executive director of the local Central Midwest Georgia Chapter, said while folks like Eubanks go above and beyond the call of duty, all Red Cross volunteers help serve the organization’s requirements – and more people are always needed.

“Even if it is just them answering calls or directing clients in the office,” Hensler explained. “We have a limited paid staff, so just to have a presence in the office would be great.”

The organization also is in need of people for its Disaster Action Team, she said. Those volunteers work off a rotating schedule and provide assistance to clients when there is a fire or other type of emergency situation.

“We couldn’t do it without our volunteers,” Hensler said. “There’s no way we would meet all our needs. We are volunteer led … they’re really the heart of what we do.

“Some only want to do specific training or care. So we have a mixture of folks … some volunteer in the office, some are more geared towards our fire awareness campaign … but there’s lots of ways to be engaged with the American Red Cross on a daily, weekly or on a ‘as needed’ basis.”

Hensler said the local chapter has expanded over the year and now covers 20 counties including Troup, Meriwether and Coweta, and stretching eastward to Lamar, Monroe and Bibb counties. The organization currently has 300 volunteers to cover the entire area.

The American Red Cross organization responds to nearly 70,000 disasters nationwide each year, Hensler said, with the most common being house fires.

“We’ve not missed a call,” Hensler said. “Our volunteers are out there, they’re responding, they’re making sure people’s needs are met … and they’re very dedicated. They always go to meetings … always asking what they can do and how they can help out.”

To become a volunteer, folks need to fill out an application, go through a background check and participate in online and in-person training.

For Eubanks, when he is not volunteering with the Red Cross on the road, he will either be responding to fires as part of the Disaster Action Team or working with the organization on other programs like the Pillowcase project, which teaches third through fifth graders how to prepare for a disaster.

Eubanks stated he will always be a volunteer.

“Until I get too old and I can’t go anymore,” he said. “I’ll be 79 in December, but I can still keep up with most of the other volunteers.”

Anyone interested in becoming an American Red Cross volunteer or wanting more information can call the local office, 900 Dallis St., unit C, at 706-884-5818.