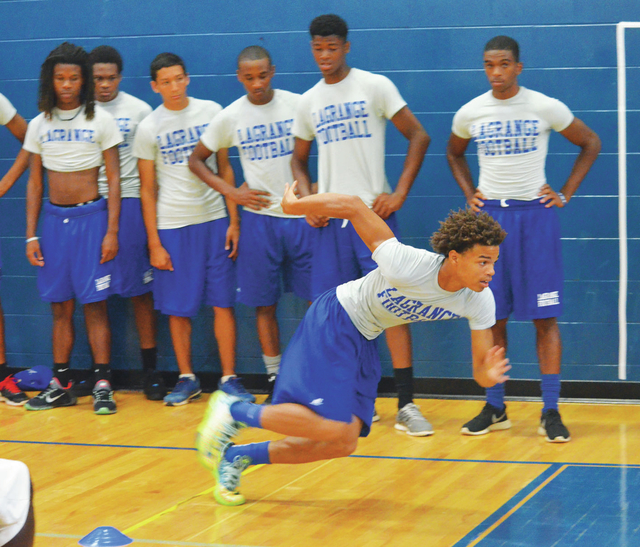 LAGRANGE – As LaGrange High’s Emmanuel Mann prepared for his lift, he had teammates there supporting him, encouraging him, letting him know they were there for him.

After Mann successfully made his lift during LaGrange’s Ironman competition this week, he dropped the weights to the mat, and he and his teammates celebrated as if he’d just made a game-winning tackle.

LaGrange head coach Dialleo Burks said that’s the sort of attitude he and the other coaches have encouraged.

During the three days of the Ironman competition, Burks was pleased to see that one-for-all attitude readily on display.

“That’s how it is. We’re fostering a team atmosphere,” Burks said. “It’s not about you. It’s about what we’re trying to do in the grand scheme of things. Once they get that element down to where it’s about my brother, and my other brother, it’s going to be much better on the field.”

Burks is in his second season as LaGrange’s head coach, and he’ll lead the team on to the field on Saturday, which is the first day the Georgia High School Association allows teams to hold official practices.

A lot of teams won’t start practicing until Monday, but LaGrange will be going at it on Saturday morning from 9 a.m. until 11 a.m.

LaGrange will maintain that morning schedule next week as a new season approaches.

LaGrange will play a preseason game against Newnan on Aug. 14 at Callaway Stadium, and it will open the season on Aug. 21 against Callaway.

“We were out there today, getting all the equipment ready, and trying to get some paint on the field,” Burks said. “We’ll be out there and ready to go.”

Teams can begin holding full-contact practices on Aug. 1, as long as they’ve had five days of conditioning.

LaGrange has a long-standing tradition of holding the Ironman competition the week that practice begins, and this year was no exception.

For the past two years, most of the Ironman competition has been held in the secondary gym at LaGrange High, with the players moving to the track for the final day as they competed in a running event.

Burks has invited the public to come and watch the competition the past two years.

“It was real good,” Burks said. “The guys have been working hard all summer.”

Burks said there were some tweaks to the competition this year.

“It was something different,” Burks said. “Coach (Jay) Floyd brought a different flavor to the weight lifting. We changed a couple of events to fit what colleges are doing now, with the shuttle, the L-drill, and broad jump. So we’re just trying to test them, get them familiar with what they’re doing so when they go to different schools and everything they’re not behind. It was good.”

Burks added that “some of the scores were impressive. There were a lot of guys that stepped up. We had some guys switch their game on.”

Floyd, who had previously been at Troup High, is one of a handful of new coaches who has joined Burks’ staff.

Burks said the preseason is giving the coaches a chance to get on the same page.

“With a new staff, we’re trying to get to know each other, get a feel for each other, and those guys really came in and hit the ground running,” Burks said. “They just have to get used to how we do things, and what we’re wanting to do.”

Future Cavaliers take to the field