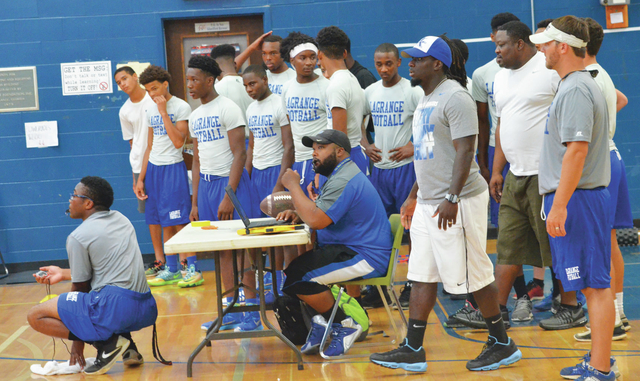 The LaGrange Grangers will take on the Newnan Cougars in a preseason game on Aug. 14 before opening their season on Aug. 21 against Callaway. Kevin Eckleberry | Daily News

http://lagrangenews.com/wp-content/uploads/sites/37/2015/07/web1_7-22-LHS5.jpgThe LaGrange Grangers will take on the Newnan Cougars in a preseason game on Aug. 14 before opening their season on Aug. 21 against Callaway. Kevin Eckleberry | Daily News

LAGRANGE – LaGrange and Newnan are set to resume their long-time rivalry on the football field.

The two teams have played more than 80 times in a rivalry that dates back more than 100 years, and they’ll meet on the gridiron once again this season, although the outcome won’t affect either team’s win-loss record.

Newnan will visit Callaway Stadium on Aug. 14 for a preseason game, with LaGrange set to officially open the season a week later on Aug. 21 against Callaway.

Newnan, which hosted LaGrange in a preseason game last year, is looking to bounce back from a rare losing season.

The Cougars opened their season with a 28-22 win over Carrollton, but they dropped their next five games and finished 3-7 and missed the playoffs.

LaGrange went 5-6 in head coach Dialleo Burks’ first season, and the Grangers finished third in Region 1-AAAAA and made it to the state playoffs.

LaGrange will play four non-region games before jumping into its Region 1-AAAAA schedule on Sept. 24 against Hardaway.

For the second straight year, LaGrange will begin its season against its two county rivals, Callaway and Troup.

LaGrange led Callaway 14-0 in the fourth quarter last season, but it ended up losing 20-14 in overtime.