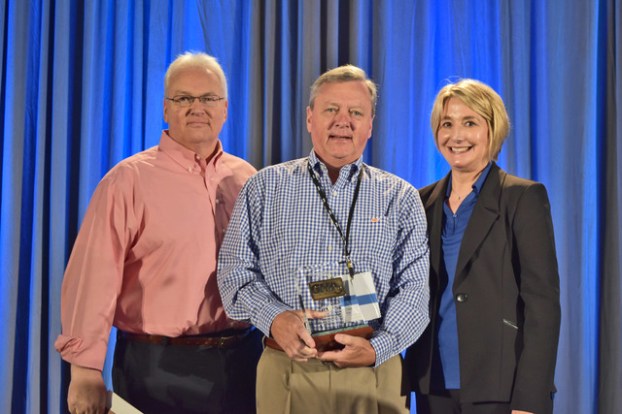 http://lagrangenews.com/wp-content/uploads/sites/37/2015/07/web1_WEB0726FulksAward.jpgJerry Fulks, center, is recognized July 16 in Atlanta during the Georgia Hospital Association annual summer meeting for receiving the GHA Chairman’s Award. He is flanked by Earl Rogers, Georgia Hospital Association president, and Candice Saunders, WellStar president/CEO and chairperson of the executive committee of the GHA Board of Trustees.

ATLANTA — Jerry Fulks, president and CEO of West Georgia Health in LaGrange, was named the recipient of the Georgia Hospital Association’s 2015 Chairman’s Award on July 16.

The GHA honored Fulks during its annual summer meeting for his leadership of the 276-bed hospital, which has operated in LaGrange for almost 80 years. Hospital board members cited Fulks as leading West Georgia Health through many positive transitions during his 14-year tenure as CEO, a position he has held since 2001.

Fulks also oversaw the building of a new four-story patient tower that houses facilities for the heart clinic, emergency department, intensive care unit and labor and delivery. He managed the launch of several new service lines over the years, including the Women’s Health Center, Wound Care Center, bariatric surgery and occupational medicine.

“While bricks and mortar are important, the south tower expansion and new building would mean nothing without the delivery of services,” said Speer Burdette, treasurer of the WGMC Board of Trustees. “The true success of his leadership is the building of a team of caring professionals who go above and beyond every day providing outstanding health care to the patients they serve.

“Through Jerry’s dedication and foresight, he’s ensured that the people of our community have access to outstanding health care not just for today, but for generations to come.”

Under his leadership, WGH continually delivers quality care in a safe environment, board members said. Fulks is also dedicated to hospital employees and their safety. In 2004, he began a hospital-wide safety initiative to ensure a safe work environment. After implementation, safety scores steadily improved and the hospital ended fiscal year 2014 as its safest ever, recording its lowest safety incident rate.

The hospital ranks as one of the safest to work in the nation with regards to employee safety. This year Healthgrades honored WGH as being in the top 5 percent nationwide in patient safety excellence for the third consecutive year.

Under Fulks’s leadership, the hospital has been recognized with numerous awards, including being named a top performer by The Joint Commission. Additionally, several programs have received first-time or continued accreditation, including the Chest Pain Center, the Bariatric Surgery Center and the cancer program.

WGH also was honored this year as one of three U.S. hospitals to receive Premier Inc.’s QUEST Award for outstanding patient care. In addition, CareChex ranked WGH in the top 10 percent of U.S. hospitals for Medical Excellence in Overall Hospital Care as well as Overall Surgical Care.

“Jerry Fulks’ outstanding leadership has been a fundamental part of the success of West Georgia Health and its ability to serve the community effectively,” said Georgia Hospital Association President Earl Rogers. “We appreciate all he and the West Georgia Health staff have done, and continue to do, for the health care field. He is a most-deserving recipient of this award.”

Vehicles crash in front of medical center Melanie Ruberti mruberti@civitasmedia.com EMS workers prepare to get an occupant of an older... read more