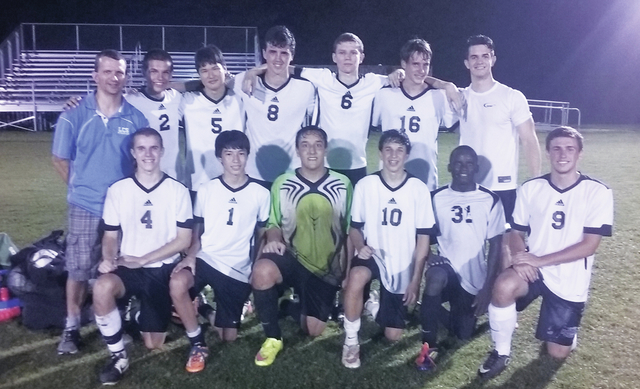 HOGANSVILLE – The situation was dire.

After making it through to the championship game of a local summer soccer league, the Lafayette Christian School Cougars found themselves facing a 3-0 deficit against the Troup Tigers.

By the half the Cougars had cut their deficit to 3-2, and they went on to claim a dramatic 5-4 victory in overtime.

With three minutes remaining in the second of two five-minute overtime periods, Graham Oliver scored the go-ahead goal, and the Cougars were able to hang on for the win.

It was the culmination of a successful summer for the Cougars.

The league, which included teams from Callaway, LaGrange, Troup, LaGrange Academy and Lafayette Christian, kicked off on June 15, and all of the games were played at Callaway High’s soccer complex.

Lafayette Christian earned the number one seed for Thursday’s season-ending tournament after finishing with the best record in the regular season.

As the tournament’s top seed, Lafayette Christian had a first-round bye, so the players were rested by the time the championship game came around.

“We did well during the season,” Lafayette Christian coach Shannon Powell said. “We took first in the season, and we knew coming in to today we’d be able to rest. So they were ready to play.”

Troup finished second in the standings to Lafayette Christian, and those teams had some hard-fought games throughout the summer.

“During the season, we tied them twice and beat them once,” Powell said. “So, we knew it was going to be tough. The best two teams were here, and that was good.”

Powell said the summer league was a tremendous benefit for his players, many of whom only play soccer during the high-school season.

Powell added that ” I’m glad (LaGrange coach Keita Placide) put it together. I hope we do it again next year.”