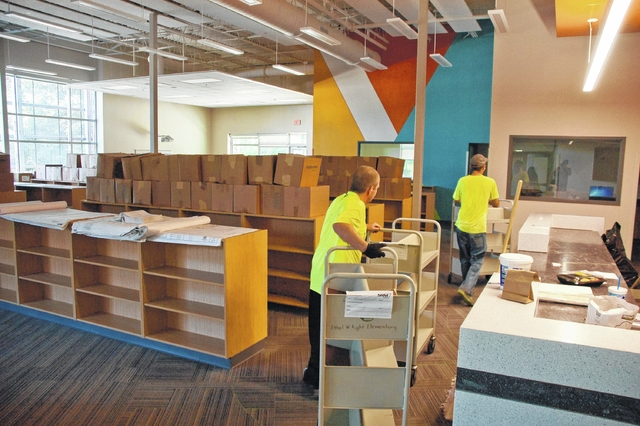 A moving truck sits next to the front entrance of the new Ethel W. Kight Elementary School off Gordon Road on Tuesday. Workers were moving in furniture, equipment and supplies; and cleaning and arranging items in preparation for faculty and staff to arrive Monday. Classes start Aug. 10.

http://lagrangenews.com/wp-content/uploads/sites/37/2015/07/web1_0726EthelKight12.jpgA moving truck sits next to the front entrance of the new Ethel W. Kight Elementary School off Gordon Road on Tuesday. Workers were moving in furniture, equipment and supplies; and cleaning and arranging items in preparation for faculty and staff to arrive Monday. Classes start Aug. 10. LaGRANGE — When Ethel W. Kight Elementary School students go back to class Aug. 10, they’ll walk through the doors of a brand new facility.

For the past year, Ethel Kight students have been taught in the former West Side Magnet School building. It was a temporary situation – in fact the school system July 1 officially sold the West Side building to LaGrange College for $1 million, so there’s no turning back.

While teachers and students used the West Side building, workers tore down the old Ethel Kight school off Gordon Road and constructed in its place a bigger, but more efficient facility. With Monday set as the move-in date for faculty and staff, the building was undergoing final checks and preparations earlier this week.

“We’re proud of it,” Russell said Tuesday inside the new gym of Ethel Kight Elementary.

Freeman and Associates has overseen the project from the start, which started with tearing down the old Ethel Kight Elementary School in summer 2014. Russell said there was more rain than anticipated during the time frame, but his crews worked through it and kept on schedule. Otherwise, he said the project was “pretty smooth.”

Although based out of Columbus, Freeman and Associates used a number of subcontractors and tried to keep many of the jobs local, Russell added. He estimated about 75 percent of the labor on the facility was performed by locals.

“Even if the subcontractors aren’t local, a lot of them use local people,” he said.

Workers this week were moving in materials, furniture and supplies to the new Ethel Kight school. In total, subcontractor ServiceMaster Restore has moved in about 3,500 boxes, said Rusty Yawn, division manager for the company.

“There’s about 50 different rooms to put stuff in, and we’ve got a lot of stuff,” Yawn said.

He added, “It’s going to be a beautiful facility.”

ServiceMaster workers have been moving, cleaning the facility and arranging furniture since June 26 in preparation for Monday’s move in.

Ryan Traylor, school system maintenance director, said that much of the work being finished this past week involved going through a “punch list” of items to ensure everything was in place.

“We’re getting there,” Traylor said Tuesday. “We’ll be there, ready when it’s time to start.”

‘Point of no return’

The 50-year-old building had deteriorated to a point that it would’ve been more expensive to fix it up than to rebuild, said John Radcliffe, assistant superintendent of maintenance and operations for Troup County School System.

“At the old Ethel Kight, teachers had to sandbag doors in the rainy season … the roof was leaking,” Radcliffe said, listing some of the issues with the old building. “The way the school was built and later added on … the rain would gather and come in under the doors. … We had to actually guide water down the hallway and out the back door. It had reached the point of no return.”

However, the location of the school was “perfect” for its zone, Radcliffe added. The school system has a longterm facilities plan to move toward larger, centrally located elementary schools for the county’s school zones to be more cost-effective and untangle bus routes.

“We’re trying to make a singular school system out of four different school systems,” Radcliffe said, referring to how most of the schools were built when the county and cities all had separate systems. Moving toward fewer overall facilities “is what the Advisory Task Force felt we should go toward.”

At 101,801 total square feet and two stories, the new Ethel W. Kight Elementary has a maximum capacity of 800 students. There won’t be near that many set to go this school year, Radcliffe said, but the facility has been designed to accommodate growth.

One part of the old school still stands – the cafeteria, which has been renovated with new kitchen equipment, tables, seats and an outdoor patio where students can eat. A plaque still is affixed to the wall, noting the add-on was built in 1973, when the building was Troup Junior High School, with Callaway Foundation funding.

The new building has been equipped with new technology, including more efficient utility equipment.

For lighting, the school system opted to use LEDs, or light-emitting diodes, which use a fraction of the electricity, generate less heat and have a longer lifespan than fluorescent lights. Light switches in certain areas at the school also are connected to motion sensors to automatically shut off the lights if no one is around.

A newer type of climate control system called VRF, or variable refrigerant flow, is installed in the school and is more efficient than a traditional system, Radcliffe said, and allows custom air control and monitoring for each room down to humidity levels, air flow and temperature. The system also has a self-diagnostic function so officials can know what is wrong with it before a maintenance person steps foot in the building.

The school also will have new computer labs and a media center with computers where students can practice presentations and study together.

The media center “has conversation areas and some technology, so a student who wants to come in and study with other students can do that,” said Yolanda Stephen, director of public relations for Troup County Schools. “If they want to read or work on presentations, they can do that as well.”

There also are new safety features. The double doors at the front entrance along with other outside doors will automatically lock about 8 a.m., Radcliffe said. After that, the only way a person can enter is if they are let in from the reception area.

Officials also can automatically lock down the school with the touch of a button in case of emergency or potential threats.

Expanded “green space” with a new playground outside also gives children more opportunities for outside activities, Radcliffe added. Inside, classrooms have been designed for an open environment and furnished with new ergonomic desks “that are like nothing else in Troup County” to facilitate learning, he said.

The new school comes with a price tag of about $16 million, funded from special-purpose, local-option sales tax – or SPLOST – funds. The SPLOST, a voter-approved 1 percent sales tax on items countywide, can be used for specified capital expenses, like building, equipment and maintenance costs – but not salaries or programs.

“If the citizens had not voted for SPLOST, the system could not afford to (build the school),” Radcliffe said. “We would’ve repaired what we could, but we wouldn’t be able to put a new facility there.”

Radcliffe noted that the school system had an option to seek a bond to fund the entire project, along with others, up front and pay it off with SPLOST money. Officials instead decided to fund the project directly, using its monthly SPLOST payments from the state to reimburse the cost and avoiding about $3 million to $4 million in interest payments, he said.

Ethel Kight was an educator whose legacy has endured for decades. Although her name was taken off the school in the 1960s, it was reinstated in 1996 and now has transferred to a new building.

“We’re really anxious to get the kids over there and really want to be there to see kids’ faces when they’re coming to school,” Radcliffe said.

He added that the building has been designed to serve Troup County students for generations to come.

“It’s a good school, we look forward to it operating for a long time into the future … and being able to look back at its legacy as it goes on,” Radcliffe said.