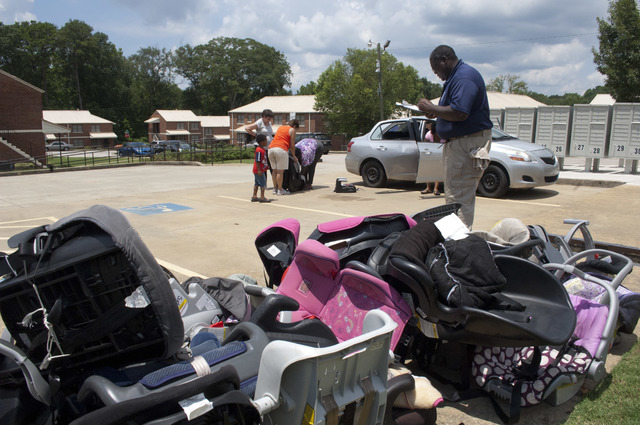 Used car seats sit in a parking lot at the Benjamin Hill Apartments off Whitesville Road during a car seat give away Saturday. Volunteers gave away more than 80 donated seats to people in need as part of a back-to-school program.

http://lagrangenews.com/wp-content/uploads/sites/37/2015/07/web1_CarSeats1.jpgUsed car seats sit in a parking lot at the Benjamin Hill Apartments off Whitesville Road during a car seat give away Saturday. Volunteers gave away more than 80 donated seats to people in need as part of a back-to-school program.

LaGRANGE — Local and regional law enforcement, along with West Georgia STAR, the nonprofit arm of the LaGrange Housing Authority, gave away more than 80 new car seats to people in need Saturday on Chatham Street.

The back-to-school giveaway featured a roll-over crash simulator and instructions from the Georgia State Patrol on how to safely and properly install a car seat, along with food, inflatable play areas and face painting.

GSP handled the distribution of the donated car seats, which have come from various organizations including Atlanta Fire and Rescue and the Governor’s Office of Highway Safety, according to GSP Sgt. 1st Class Maurice Rains, commander of the local GSP post.

The LaGrange police and fire departments were also on hand with a police cruiser and a fire truck for kids to explore.

Inetha Hatten, one of the event’s organizers, said she was pleased with how the event came together.

“I think it went great, there was a lot of excitement,” she said. “It’s the first time they (Atlanta Fire and Rescue) ever came to LaGrange. It’s usually done in Atlanta.”

Hatten said she’d like to make the event an annual program, and is working with the car seat donors to try to bring them back next year.

“In fact, I’m waiting now to find out if they’re going to have funds so they can come back next year,” she said.

In 2008, a total of 14,154 children ages 6 through 8 years in Georgia were involved in vehicle crashes. Of those, 10 were killed and 1,755 were injured. Only 12 percent of these children reportedly used a supplemental restraint, such as a child safety seat or a booster seat, in addition to the adult seat belt, according to the Governor’s Office of Highway Safety.

Hospitalization charges for 248 children hospitalized in traffic-related injuries totaled about $7 million in that same year. Some 5,111 emergency room visits stemming from motor vehicle crashes incurred another $5 million in expenses, according to the Governor’s Office of Highway Safety.

Georgia law requires that every driver who transports a child 8 years of age and younger in a passenger automobile, van or pickup truck must restrain the child in a child safety seat.