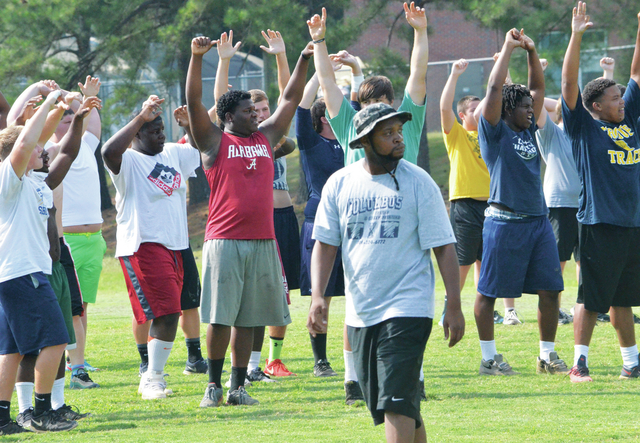 Pete Wiggins will lead the Callaway Cavaliers onto the field this afternoon as preseason practice gets started. Kevin Eckleberry | Daily News

http://lagrangenews.com/wp-content/uploads/sites/37/2015/07/web1_7-26-wiggins.jpgPete Wiggins will lead the Callaway Cavaliers onto the field this afternoon as preseason practice gets started. Kevin Eckleberry | Daily News Callaway, LaGrange and Troup will all be on the field today as the first full week of preseason practice gets under way.

According to the Georgia High School Association calendar, teams can begin holding full-contact practices on Saturday, as long as they’ve had the required five days of conditioning practices.

Then soon enough, it’ll be time to play football.

LaGrange and Callaway will open the season against each other on Aug. 21, and Troup will begin its season on Aug. 28 against LaGrange.

Since school isn’t in session yet, the local teams can be flexible with their practice schedules.

While LaGrange and Troup will practice during the morning this week, Callaway will be going in the afternoon.

The teams wrapped up their busy summer schedules last week.

Troup, which begins preseason practice under the direction of new head coach Tanner Glisson, will be practicing in the morning until school begins.

Troup will have a chance to play another team for the first time on Aug. 13 when it hosts a preseason game against Spencer.

Troup will be back at Callaway Stadium the following week on Aug. 20 for a preseason game against Upson-Lee.

Because Troup didn’t have spring practice, it is allowed to play two preseason games, and the team will be taking advantage of that.

Glisson had been the Manchester head coach the previous two seasons, and he took over the Troup program in May, although he didn’t begin to work with the players until the summer program began in June.

“Right now, we’re trying to teach our kids how we want to practice, how you transition, how you move around, what they expect,” Glisson said last week. “That’s kind of what we’re doing.”

Callaway concluded its summer schedule with its Ironman competition last week, and the team is heading into its 11th preseason practice under head coach Pete Wiggins.

Defensive coordinator Dusty Hubbard, who has been working alongside Wiggins since he became head coach, said the Ironman competition lets the players know the season is coming quickly.

“For them, it signifies that we’re about ready to get real,” Hubbard said. “The lifting four, five days a week is over now. It’s time to start doing football-type stuff.”

Callaway will play a preseason game against Greenville on Aug. 14 before opening the season the following week.

Dialleo Burks, who is in his second season as LaGrange’s head coach, had his players on the practice field at Granger Park at 9 a.m. on Saturday, which was the first day the GHSA allowed teams to have official practices.

LaGrange has a preseason game against Newnan on Aug. 14 at Callaway Stadium.

Preseason practice is also getting started for Lafayette Christian School, which for the first ever is under the direction of a head coach other than Nick Nehring.

While Nehring will remain on the coaching staff, Nate Shaw is now the head coach.

“We’re excited about what we have,” Shaw said during spring practice. “We have some good quality players. We have a lot of experience back from last year. We also have a good crop of freshmen coming in, that want to contribute, and we have the luxury of letting them develop.”