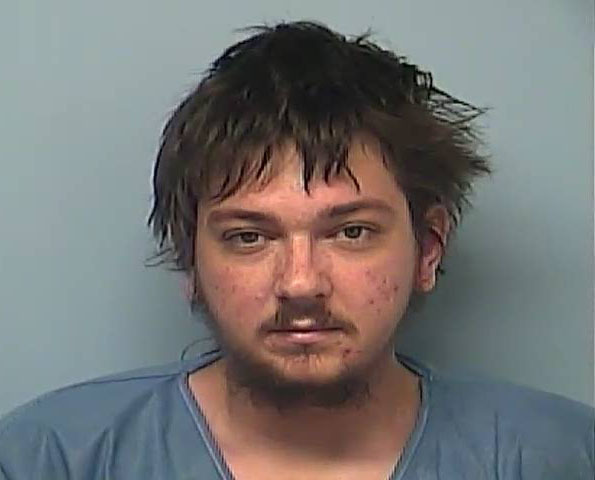 LaGRANGE — A 22-year-old man faces a burglary charge after police tracked him down by a trail of blood from a cut he suffered after allegedly breaking out a restaurant’s window early Sunday morning.

LaGrange police responded to Venucci’s at 129 Main St. about 4 a.m. Sunday and found the front glass of the business shattered. Inside the business, officers reported finding a bottle of wine, a cell phone and a wallet that contained an ID of the suspect, Kyle Daniel Blanton of LaGrange.

An officer noticed a trail of blood from the broken window and officers followed it for a couple of blocks, leading to Checkers at 211 Vernon St. Officers reported that they found Blanton bloody, without any clothes and lying on the floor of a bathroom at the back of the fast food restaurant.

Blanton was taken to West Georgia Medical Center for treatment. Officers said he had a bag containing five bottles of wine, two bags of chicken and a bag of bread.

Reviewing surveillance footage, an officer reported that it showed the suspect come into Venucci’s on Saturday evening and hide in a back room until employees had left. He then came out and began taking items, the officer reported.

According to a report, the damage to the window was valued at $350 and items taken valued at a total $82.50.

Another police report states that Blanton was charged Friday evening with public drunkenness in a separate incident where an officer reported seeing him walking “in a stupor condition” on North Greenwood at Haralson streets. The officer said Blanton then exposed himself and began urinating at a traffic box in plain view from the road.

A breath test Friday showed Blanton had a 0.120 percent blood alcohol content, according to the officer’s report.

After the Sunday incident, Blanton was treated and released from the hospital, then arrested and charged with felony burglary. He was being held at Troup County Jail this morning; his bond had not been set.