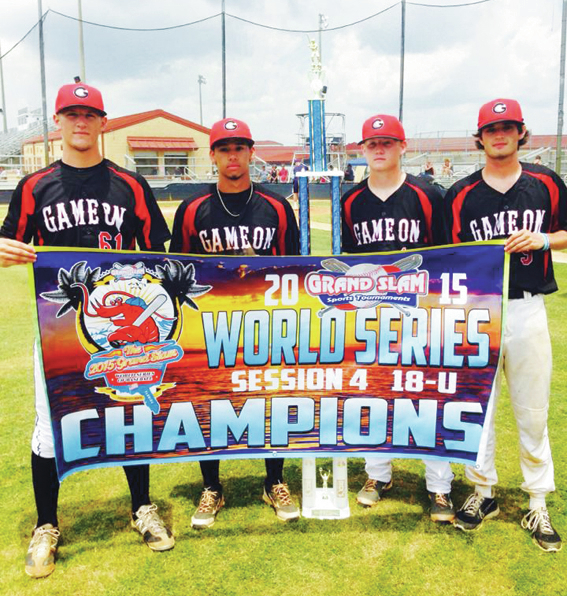 With four local players providing a helping hand, The GameOn 18-and-under baseball team rolled to the championship of the Grand Slam World Series in Panama City.

The GameOn team posted a 6-0 record in the tournament, and it beat a team from Dallas 6-2 to claim the championship.

Craft and Garrett helped lead Callaway to a region championship and a spot in the quarterfinals of the state playoffs last season.

Garrett was a shortstop for Callaway last season, but he played outfield for the GameOn team.

Shannon Snyder, director of the local GameOn organization and the coach of the 18-and-under team, said Garrett is a phenomenal outfielder.

“I’ve been fortunate to have a lot of outfielders, and if there’s a better outfielder, I’d love to see that guy,” Snyder said. “I’d pay to watch him play.”

Craft was a pitcher for Callaway and for GameOn, and during his one start in the World Series, he threw five dominant innings in a victory.

“He had all three pitches working,” Snyder said. “He’s a guy, he’s going to play some pro ball one day. With his body and his velocity, he’s got a chance to play.”

Daugherty, the ace of LaGrange’s staff last season, came through with a clutch pitching performance in the World Series.

With one out and the bases loaded and his team clinging to a two-run lead, Daugherty entered the game and got back-to-back strikeouts to preserve a 7-5 win.

“He came in in probably the biggest situation in the whole tournament,” Snyder said. “They didn’t have a prayer. They were jumping at it.”

Turner, a pitcher and infielder for Troup, was strictly a second baseman for GameOn.

“He was really solid, and had a couple of big hits early,” Snyder said. “He’s one of those quiet leaders. He doesn’t say a whole lot. He just gets the job done.”

While Turner has one more season of high-school baseball to play, Daugherty, Garrett and Craft are preparing for college baseball.

Garrett is headed to Wallace State Community College (Ala.), Craft will play for Chipola College (Fla.), and Daugherty is staying in Georgia to play at Abraham Baldwin Agricultural College.