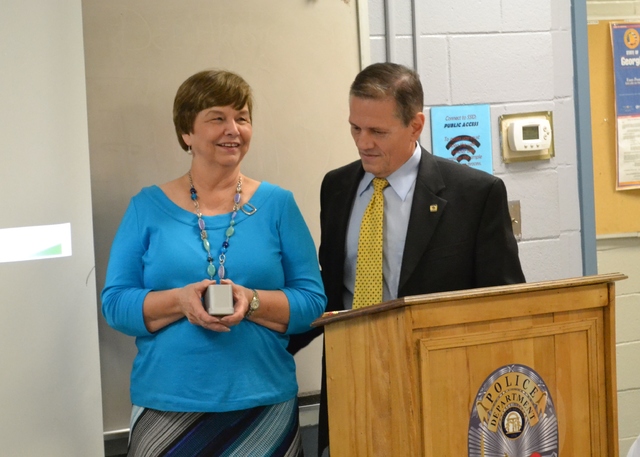 Elaine Griffin retires Wednesday after a total 19 years with the City of LaGrange. During a luncheon hosted in her honor Friday, LaGrange police employees and others showed a video they created expressing their appreciation of her work.

http://lagrangenews.com/wp-content/uploads/sites/37/2015/07/web1_WEB0728ElaineGriffin022.jpgElaine Griffin retires Wednesday after a total 19 years with the City of LaGrange. During a luncheon hosted in her honor Friday, LaGrange police employees and others showed a video they created expressing their appreciation of her work. Elaine Griffin receives a special commemorative pin from LaGrange Public Safety Chief Lou Dekmar during a luncheon Friday hosted in her honor. She retires Wednesday after a total 19 years with the City of LaGrange, with 10 as executive assistant and described ‘mother’ to recruits at LaGrange Police Department.

http://lagrangenews.com/wp-content/uploads/sites/37/2015/07/web1_WEB0728ElaineGriffin012.jpgElaine Griffin receives a special commemorative pin from LaGrange Public Safety Chief Lou Dekmar during a luncheon Friday hosted in her honor. She retires Wednesday after a total 19 years with the City of LaGrange, with 10 as executive assistant and described ‘mother’ to recruits at LaGrange Police Department.

LaGRANGE — For anyone who applied for a job at the LaGrange Police Department, Elaine Griffin was probably one of the first people they met.

For many, she was the lifeline that helped potential recruits make it through the application process, into training and onto the academy. Griffin was the friendly face that encouraged them when they stumbled into roadblocks in the hiring process, cheered them on as recruits made it through the rigorous training courses and embraced them when they became full-fledged LPD officers.

But after 10 years with LPD and nine years working for the city of LaGrange as an executive assistant, Griffin is saying goodbye to those folks she calls her “second family” and taking retirement to spend more time with her husband and children.

“I’ve enjoyed it all,” said Griffin. “They’ve all been different, but again, I’ve been able to help people. I’ve made a lot of friends … all the patrol officers because they’ve been through the hiring process. I feel like I’ve mothered them. I don’t do the background checks, but I do get them off to the academy. We have a lot of good folks working here, a lot of folks who are dedicated to their jobs.”

Griffin was born and raised in LaGrange, but moved away in when she was in high school. She quickly returned, got married and raised a family of her own. On March 25, 1996, Griffin became an executive assistant in the Human Resources Department for the City of LaGrange.

“I was able to know everyone who worked for the city … I’m able to like a job when I’m able to help folks,” she explained.

In 2005, Griffin said the HR department became overstaffed, so she transferred to LPD and brought the hiring process with her.

“She would go wherever she was asked to, to facilitate customer service,” said Dekmar. “She was always conscientious. She was always the contact point for those who wanted to be police officers, and I always ask them at the end of the interview process if they were treated fairly, and they always comment nicely about ‘Miss Elaine’ … she was a great ambassador for the police department.”

Friday, Griffin’s “second family,” the law enforcement officers and employees at LPD, gave the dedicated employee a fond send off as she gets ready to retire after 19 years with the city of LaGrange.

The group held a special luncheon for Griffin that was also attended by some of her family members and close friends.

LPD officers and employees at the event showed Griffin how much her hard work, loyalty and friendship meant to the department. The group filmed and edited together a video filled with personal messages on how much Griffin meant to them throughout the years from the officers, detectives, employees and others.

As a retirement gift, the department presented Griffin and her husband with an enormous porch swing, which was handmade by patrol officer Rick Brock. It was also specially engraved for the long time employee.

When asked what she will miss the most, Griffin did not hesitate.

“The camaraderie,” she said. “The people that I’ve worked with everyday – all the officers. Just helping the employer get done what needs to be done.”

Griffin said she and her husband plan to take some time to visit their six children, 13 grandchildren and one great-grandchild, who all live in different cities around the state. She’ll also spend more time with her mom, who is 90 years old and lives in LaGrange.

Dekmar said Griffin’s presence at LPD will definitely be missed.

“I asked her this morning if she was sure she wanted to retire,” he said Friday. “She was an excellent employee in so many ways and a great person … courteous and always pleasant to be around.”

“I’m going to miss everybody,” she said. “I’m glad I am local. I may come back periodically and come in and visit – come in for lunch or something. I’m not going to lose touch; these friends are too valuable.”