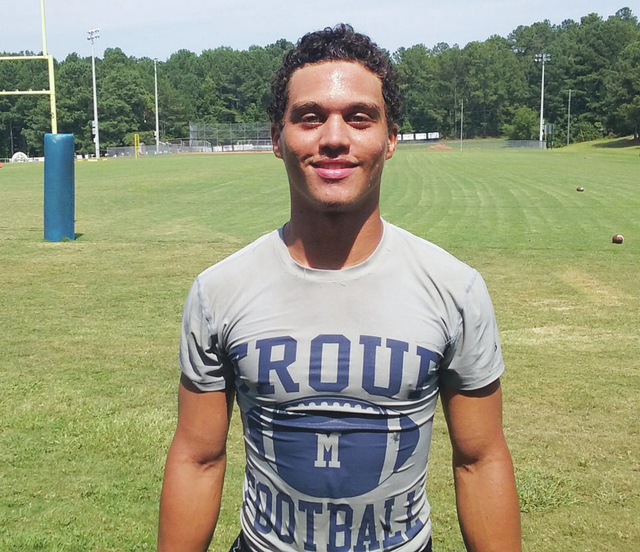 LAGRANGE – There’s no letting up.

As the temperature soared into the 90s on Tuesday, the Troup Tigers were on the field for the second day of preseason practice.

The coaches, including new head coach Tanner Glisson, were pushing the players hard as they look to get them ready for a season that is less than a month away.

Among the 100-plus players who were on the practice field on Tuesday were Eli Patrick, Austin Carter and Camren Russell, who were selected by their teammates to be team captains.

Those three, along with the other team leaders, are doing their best to make sure everyone keeps going strong in practice, even when the heat is at its most ferocious.

“You have to remind them that it’s mind over matter,” said Patrick, a junior linebacker. “You can’t let the sun, or the weather, or anything affect the team. You have to be able to push through it.”

Carter, a senior linebacker, said “you have to stay strong mentally, and just have that edge,” and he said that extends to practices and games.

“Everytime something goes wrong, you have to keep going,” he said. “You have to go on to the next play.”

Russell said it was “pretty rough” during practice on Tuesday because of the heat, but he knows that comes with the territory when it’s July in Georgia.

“You have to tell them hey, get up, we’ve got another one, another rep,” Russell said.

All three men said they’re grateful to have been selected to be a team captain.

“It’s really an honor,” Patrick said. “The fact that it was the players, not the coaches, means a lot. It also puts more weight on our shoulders. It’s a big responsibility.”

Carter added that “when you’re respected by your peers, and you’re doing the right things, they want you to represent them. That means a lot.”

Russell, a junior running back with with the ability to score from anywhere on the field, said the fact that “my peers voted for me means a lot.”

Patrick, Carter and Russell will all be counted on provide leadership, and to also get it done on the field this season.

Patrick and Carter will be key members of the defense from their linebacker position.

Russell’s role on the team expanded early a year ago when standout running back Dre Towns was lost for the season because of an injury suffered in the first game against LaGrange.

Along with Dexter Shealey and Mess Bonner, Russell was part of an explosive group of running backs.

All of the players are adjusting to a new coaching staff, and Russell said the enthusiasm level is high.

“(Glisson) is doing a lot of different things to keep the energy up with the team,” Russell said. “It’s working. I feel very excited about this upcoming season.”