Grangers get ready to tee it up 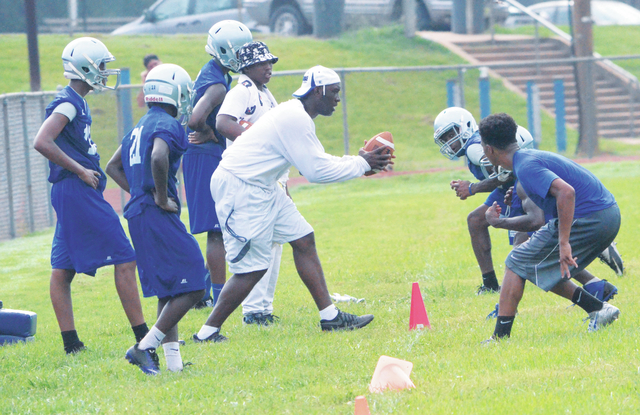 LaGrange High head coach Dialleo Burks works with some of the players during practice on Wednesday. Burks is returning for his second second as head coach. Kevin Eckleberry | Daily News

http://lagrangenews.com/wp-content/uploads/sites/37/2015/07/web1_7-30-LHS2.jpgLaGrange High head coach Dialleo Burks works with some of the players during practice on Wednesday. Burks is returning for his second second as head coach. Kevin Eckleberry | Daily News

LAGRANGE – As the LaGrange Grangers convened for their first official preseason practice on Saturday, there were some new faces on the practice field at Granger Park.

This week, Burks’ new-look coaching staff is in place as the Grangers continue to prepare for a new season that is less than a month away.

LaGrange will host Newnan in a preseason game on Aug. 14 before opening the season on Aug. 21 against Callaway.

Burks, who is in his second season as LaGrange’s head coach, said he has made sure the new coaches have the respect of all the players.

“I told them, as long as they’re wearing that patch on their shirt, you’re going to respect them, and trust them, because I hired them to do a job, to win,” Burks said. “It’s been good.”

Burks said it helped that the new coaches have been able to spend the summer months getting to know the players, and vice versa.

“We’ve spent the last eight weeks together with our workouts,” Burks said.

Saturday was the first day teams were allowed to hold official practices according to the Georgia High School Association, and the Grangers didn’t waste any time.

At 9 a.m. on Saturday, LaGrange’s players were at Granger Park for the first practice of the season.

LaGrange has maintained that morning workout schedule this week, leading up to this weekend when the team heads to the Georgia Sheriffs’ camp for a camp.

On Saturday, LaGrange will hold its first full-contact practice of the preseason after spending the night at the camp on Friday.

“We’ll be in full pads, but we’ll ease them into it,” Burks said. “We’re not going to go all out. We will have a couple of periods where we’ll go live. It’ll be structured.”

Burks took the players to the camp a year ago, and he said it’s something he plans on making an annual event.

“It’ll be an every year thing,” Burks said. “It’s team bonding. You get out there and we can just focus on football, no outside distractions. We’re going to take their cell phones, their car keys. They can’t go anywhere. It’ll be a good time.”

As for this week, Burks said the players have handled everything well.

Even though the Grangers are practicing in the morning, the heat can still be an issue, and the players are being pushed hard by the coaches.

“It was tough starting out,” Burks said. “It’s a different feel from the gym running and track running. We got here, and they fought through it.”

Burks said everyone, himself included, has been maintaining a “high energy” level.

Burks said a major focus this week is making sure the players understand the importance of doing things the correct way, even if it means a lot of repitition.

“We’ve just been taking our time to teach,” Burks said. “We want everything as perfect as it can get. If it’s not right, I tell (offensive coordinator Jay Floyd), let’s run it over. We do not end on mistakes at all. So they can see in their mind that hey, we’re striving for perfection.”

Countdown is on for Tigers