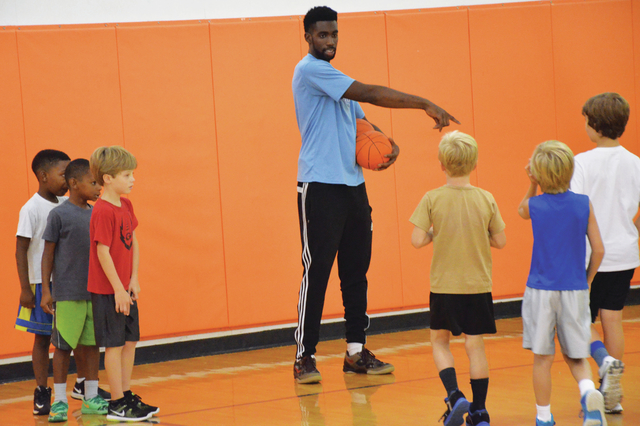 Bernard Brooks, who helped the LaGrange Grangers play for a state championship in 2010, helped out at the Blue Star Basketball Camp this week. Brooks is a new member of LaGrange High’s coaching staff. Kevin Eckleberry | Daily News

http://lagrangenews.com/wp-content/uploads/sites/37/2015/07/web1_7-31-camp2.jpgBernard Brooks, who helped the LaGrange Grangers play for a state championship in 2010, helped out at the Blue Star Basketball Camp this week. Brooks is a new member of LaGrange High’s coaching staff. Kevin Eckleberry | Daily News

LAGRANGE – When the LaGrange Grangers played for a state-championship in 2010, Kerun Hill, Royal Thomas and Bernard Brooks were along for the ride.

Those three players were starters and critical players on a boys’ basketball team that only lost one game, and that came in the state-championship game against a powerful Columbia team.

This week, those three men were together again on a basketball court, although they’re no longer playing.

Hill, Thomas and Brooks are now members of the LaGrange High coaching staff, and they’ll be working with new head coach Mark Veal next season.

This week, the former Grangers were helping out at the Blue Star Basketball Camp at the Mike Daniel Recreation Center.

For the past two decades, the youth camp was run by long-time LaGrange basketball coach Mike Pauley.

Pauley is now LaGrange High’s athletic director, though, and Veal is the new head basketball coach, and he has also taken over the Blue Star camp.

With everything Veal had to do this summer after taking over as head coach, he wasn’t sure if he’d offer the youth camp, but he’s happy that he did.

“I’m glad we did the camp,” said Veal, who has been Pauley’s top assistant for several years. “All of our coaches are glad. We heard positive feedback from parents and kids. So we’re going to continue to do it next year. I had a good time with it, and everybody else did, too.”

When Veal was putting together his new coaching staff, he reached out to some of his former players.

Hill was already a coach at LaGrange, and Thomas and Brooks will join the staff for the 2015-2016 season.

Thomas recently completed a standout basketball career at Georgia College and State University in Milledgeville, and Brooks brings some world experience to LaGrange after playing in a professional basketball league in El Salvador last year.

“They were young and probably went to the camp, and then they helped as players, and now they’re staff members,” Veal said. “I think that’s great.”

A handful of current LaGrange players were also helping out at the camp, including Keenan Gray, Brian Fanning, Gabe Duckett, Alex Dantzler and Jerious Freeman.

“They work well with the kids,” Veal said of his players. “They have fun, and they have a good time with them. Some of those kids are 5-years-old, and we had a couple of 6-6 kids. They get up there and hang from their legs. They have fun and smile about it.”

Also lending a hand at the camp were LaGrange assistant coaches Scotty Alexander and Blake Craft.

Veal said in the past some of the campers have been among the Grangers’ biggest fans.

“They’ll come to the games, and they’ll cheer as hard as anybody for our kids,” Veal said.