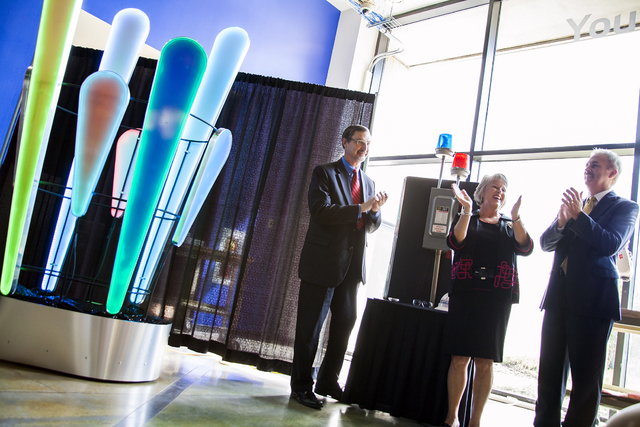 LaGRANGE — More than a quarter — 27.4 percent — of Troup County public high school students failed to graduate in four years in 2014, according to the Troup County School System.

The unemployment rate hovers in Troup County at 6.3 percent, 1 percentage point above the national average in June, according to the Bureau of Labor Statistics.

The THINC College and Career Academy, a new charter school located in the West Georgia Technical College campus off Orchard Hill Road, aims to address those issues and celebrated its opening Thursday.

“Imagine a school where students choose to go there,” said John Asbell, THINC board chairman, to a crowd of several hundred during the celebration. “… This is a huge day in the life of our school and our community. … Good ideas start with a spark. It’s that one thing that triggers something bigger than itself.”

The 60,000-square-foot facility is unlike any other school in Troup County. Once it’s fully operational, between 400 and 500 total students from TCSS’s three high schools will pass through the hallways each day. They’ll be able to take classes ranging from advanced placement civics to criminal justice and welding. THINC students also can earn college credit from West Georgia Tech.

The career academy is one of 33 schools of its type in Georgia. Statewide, more than 15,000 students are enrolled in career academies. The goal of the school is to develop a more skilled workforces, preparing students not just for college, but for careers, said Kathy Carlisle, THINC’s executive director.

Georgia Lt. Gov. Casey Cagle, who spoke at the opening celebration, agreed that career preparation is something Georgia needs now more than ever.

“Every business I sit down with and talk to, the number one thing on their mind is workforce development,” Cagle told celebration attendees. He also stated an ambition goal: “By 2020, I want every student in Georgia to have access to a career academy.”

One of those businesses seeking to bolster its workforce is Troup County’s largest employer, Kia Motors Manufacturing Georgia. The West Point-based plant employs more than 3,000 people, and the company’s senior vice president for human resources, Randy Jackson, is eyeing the future.

He told the crowd at THINC he contacted then-Troup County Commission Chairman Ricky Wolfe in 2011 and asked him if the county would be interested in supporting a career academy. After the wheels started rolling, the state school superintendent, Helen Rice, signed the charter for THINC on Dec. 4, 2013.

“We wanted to change lives,” Jackson said. “We wanted to get youngsters in this school and get them graduated.”

Jackson and Kia aren’t the only ones who will need a skilled workforce in the future. Of the top 10 employers in Troup County, more than half provide factory-style jobs that require workers who can operate computers and complicated machinery, according to the Troup County Comprehensive Annual Financial Report.

THINC will open its doors to students Aug. 10 with the rest of the Troup County School System. Beginning this year, students in grades 11 and 12 will be able to take classes at THINC. Next year, grades 9 and 10 will be added, Carlisle said.

Students with a driver’s license and a vehicle will be allowed to drive to THINC, and county school buses will transport the rest. Any student in Troup’s public high schools can take classes at THINC.

In all county high schools, classes are divided into four blocks throughout the day. There are two blocks in the morning and two in the afternoon. Students will either take their morning two blocks at THINC or their afternoon blocks – meaning two different groups will go through the school each day.

The school cost about $9.2 million to create, and Thursday, Kia donated an additional $600,000 to fund the academy.

For more information about the THINC College and Career Academy, visit www.thincacademy.net or call 706-668-6804. Students interested in enrollment should speak with their school guidance counselor.