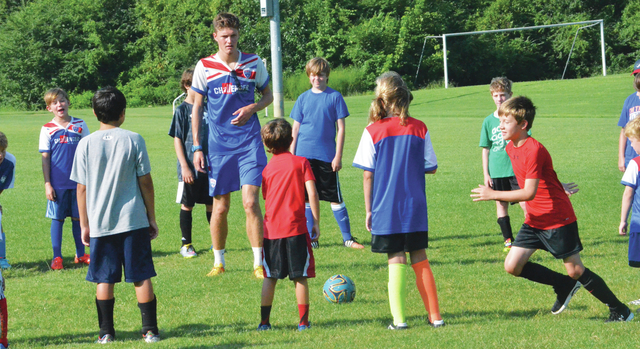 The campers got plenty of exercise during the Challenger Soccer Camp at the Troup County soccer complex. Kevin Eckleberry | Daily News The campers pile on top of each other at the conclusion of one of the drills. Kevin Eckleberry | Daily News

http://lagrangenews.com/wp-content/uploads/sites/37/2015/07/web1_7-31-soccer1.jpgThe campers pile on top of each other at the conclusion of one of the drills. Kevin Eckleberry | Daily News LAGRANGE – They kept them on the run.

The Challenger British Soccer Camp made a stop in LaGrange this week, and the five-day camp wrapped up today at the Troup County soccer complex.

Most of the drills involved plenty of movement, both from the campers, and from the instructors.

One of the drills ended with all of the campers jumping on top of one of the instructors in a pretty fair impression of a celebratory dogpile after a sports team wins a championship.

One of the instructors, Bradley Graham, said the goal of the camp is “just for them to have fun, and to learn new skills. Hopefully they’ll be able to improve on their soccer skills by the end of the week.”

The camp kicked off on Monday, and while the younger campers were on the field from 9 a.m. until noon, the older campers remained until 3 p.m.

More than 30 boys and girls participated in the camp, which has been coming to LaGrange for the past few years.

Challenger camps are held across the country, and the instructors spend the summer in the United States and stay with host families at each stop.