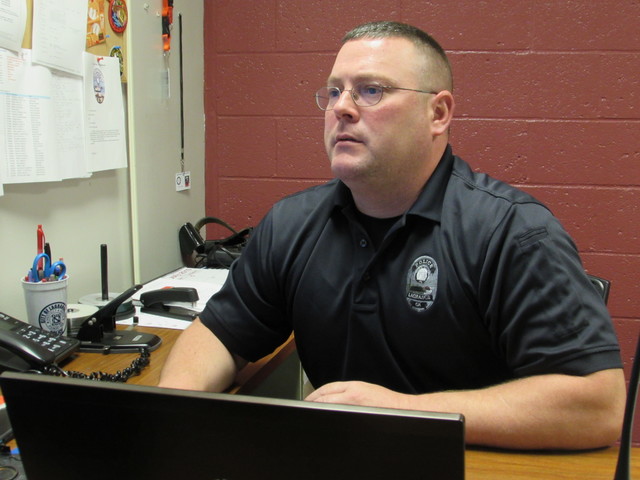 LaGrange Police Department Sgt. Mark Cavender continues to look for new leads and eyewitnesses in the April 15, 2003, shooting death of William Kent Adams, 39. Adams, from Arcadia, Missouri, was working with a company doing subcontract work for CSX Railroad in LaGrange. He was murdered in his car in the 600 block of Ridley Avenue. Cavender said while a suspect was questioned in connection with Adams’ death, no arrest has ever been made in the case.

http://lagrangenews.com/wp-content/uploads/sites/37/2015/08/web1_WEBcoldcase1.jpgLaGrange Police Department Sgt. Mark Cavender continues to look for new leads and eyewitnesses in the April 15, 2003, shooting death of William Kent Adams, 39. Adams, from Arcadia, Missouri, was working with a company doing subcontract work for CSX Railroad in LaGrange. He was murdered in his car in the 600 block of Ridley Avenue. Cavender said while a suspect was questioned in connection with Adams’ death, no arrest has ever been made in the case.

LaGRANGE — Not a day goes by that LaGrange Police Sgt. Mark Cavender doesn’t think about the brutal murder of William Kent Adams.

He still remembers hearing the call on his police radio the night of April 15, 2003. It came over the scanner initially as a suspicious vehicle sitting in the 600 block of Ridley Avenue.

“You could hear the higher tone in the officer’s voice … that there was something more,” Cavender said. “He was calling for EMS … he (the victim) was stabbed or shot, there was blood coming from his chest. I immediately started getting my stuff together to head out there.”

Cavender still had no idea what awaited him at the scene, or in the years that would follow.

According to a LaGrange Daily News article on April 16, 2003, Adams was found sitting inside a red 1996 Ford Taurus that was still running when LPD officers arrived on the scene.

The article stated Adams was found slumped over the center console with blood covering his hands, stomach and the steering wheel. He had been shot in the chest and died from his wound, according to Cavender.

“That was the beginning of 12 years of grief,” he said. “This is the first case that always haunts you — that you know needs to be solved, that you know deep in your heart who did it, but you don’t have that last little piece to prove it.”

Cavender said investigators initially found very little to no evidence to go on in the areas surrounding the crime scene.

“We canvassed that whole Thomas Town area — Ridley Avenue, Mitchell Avenue initially — and found nothing,” he recalled. “We got surveillance videos from convenience stores — nothing. We used K9 units to see if maybe the weapon had been discarded in the woods, and that yielded nothing.”

Investigators also spoke with the neighbors who made the 911 call. Cavender said back in 2003 a popular restaurant sat behind their house. The neighbors told detectives they heard a loud bang some time between 8 and 9 p.m., but thought it was restaurant employees taking out the trash. Cavender said investigators now believe those folks actually heard the gun shot that killed Adams.

In the investigation that followed, detectives learned the 39-year-old man was from Arcadia, Missouri, and was working with a company that was subcontracting with CSX railroad. According to Cavender, Adams had not been in LaGrange very long before he died and was set to leave the city the following weekend. It was Easter weekend. Detectives found Easter baskets in the trunk of Adams’ car that he had just purchased from Walmart for his two daughters.

In the following days, weeks and months after Adams’ mysterious death, investigators followed up on leads, spoke to family, friends, coworkers, folks in the area where the car — and his body — were found, plus complete strangers, Cavender said. Soon, a clear and somewhat disturbing picture of Adams started to form.

Cavender said that, according to those who loved and knew the 39-year-old best, there were two vices he was addicted to: basketball and crack cocaine.

When investigators questioned Adams’ coworkers in April 2003, they said the day he died was pay day. But when detectives found Adams’ body later that night, his wallet was sitting in his lap and was completely empty. In addition, the passenger-side window on Adam’s car was rolled down, leading Cavender to believe the motive for Adams’ murder was robbery.

In the days leading up to his death, Adams was seen playing ball by multiple people at the Easy Street Park, Cavender said, which may explain why he was in that area when he died. The 39 year old may have simply been in the wrong place at the wrong time.

Although a potential suspect was named and questioned about the murder, Cavender said no arrests in the case have been made.

As quickly as the murder happened, it seemed any tips, leads or interest from the community just as quickly disappeared.

“Homicides are an emotionally charged event. When you have someone murdered locally, you’re going to have an emotional rise out of people,” Cavender explained. “But this guy had no attachment here. There was no personal connection with him. I think over time people just forgot about this guy in their mind … except for me.”

Cavender said every year LPD opens up Adams’ case and has a new investigator pore over the notes and study the evidence in hopes of finding new leads that will lead to an arrest. The LPD detectives even had officials with the Georgia Bureau of Investigations examine the file and entered the ballistic evidence into the International Ballistic Identification System.

In the 12 years since the murder, detectives have never gotten a match, and so far the case remains unsolved.

But Cavender said he refuses to give up and believes it will only be a matter of time before the right tip or piece of evidence will help put Adams’ killers behind bars for good.

“I want closure for his family,” he said. “He had two kids. Regardless of his past, he deserves to have justice — that’s first and foremost. And I want to tell his family that the person that did this has been caught and is going away for a long time.

“There’s a lot of things that go away, but looking for people that kill people isn’t one of them.”

Anyone with any information surrounding the murder of William Kent Adams is asked to called the LaGrange Police Department at 706-883-2603 and ask for Sgt. Mark Cavender or Sgt. William Nelson. People may also send in tips by messaging LPD on their Facebook page, or text them in anonymously to 888-777.