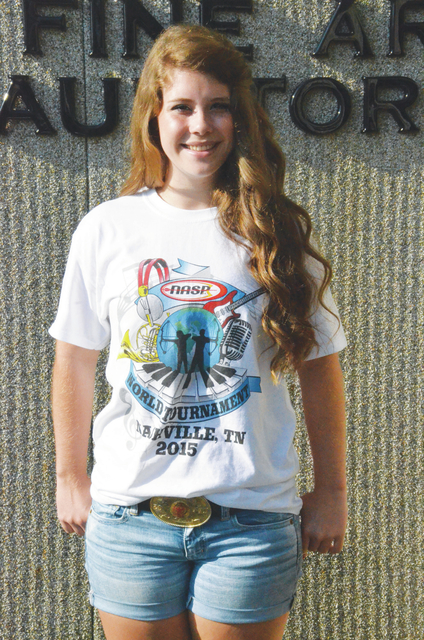 LAGRANGE – Lafayette Christian School’s Sierra Cofield returned from her trip to Tennessee with a nifty souvenir.

Cofield, a senior at Lafayette Christian, was in Chapmansboro, Tenn. in June for an archery competition.

By the time Cofield had fired her final arrow, she was second to none in her division.

As a reward for winning the International Bowhunting Organization traditional recurve world championship, Cofield didn’t receive a trophy or a medal.

She was given a belt buckle, which she has been proudly wearing since.

“I pretty much wear it everywhere since I got it,” she said.

That tournament was part of a busy and productive summer for Cofield, who is a member of Lafayette Christian’s successful archery team.

Cofield also competed in the National Archery in the Schools Program (NASP) national and world tournaments.

At the NASP world tournament that was held in Nashville, Tenn., Cofield was 13th out of 164 competitors in the high-school division, and she was 23rd out of 485 girls overall.

At the NASP national tournament, Cofield began shooting a recurve bow for the first time, and she obviously had a knack for it.

“In May, when we went to nationals, I met a lady that was a world-champion archer,” Cofield said. “And she was watching us shoot, and she wanted me to shoot a recurve. I went to a tournament in Birmingham, and that’s how I got into recurve.”

A month later, she was winning a world championship.

“It was fun. I just had a great time,” she said of her experience at the world championship. “I shot with a bunch of new people, and learned things. I was shooting against people that had been shooting their entire lives. So they helped me a little bit, and taught me some stuff just by watching them, and interacting with them.”

Cofield started competing in archery when she was a freshman, and she’ll be a member of the Lafayette Christian team that begins its season in November.