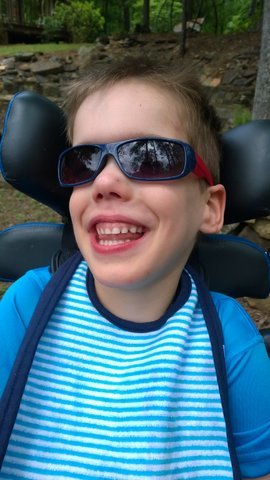 Sam Battle, left, sits with his twin brother, Charlie. The twins were born three months early and Sam was later diagnosed by doctors with cerebral palsy, cortical visual impairment and severe epilepsy, among other health issues.

http://lagrangenews.com/wp-content/uploads/sites/37/2015/08/web1_WEB0805Sam011.jpgSam Battle, left, sits with his twin brother, Charlie. The twins were born three months early and Sam was later diagnosed by doctors with cerebral palsy, cortical visual impairment and severe epilepsy, among other health issues. Sam Battle stays in the NICU as an infant. He had to stay for three months before he was allowed to come home.

http://lagrangenews.com/wp-content/uploads/sites/37/2015/08/web1_WEB0805Sam021.jpgSam Battle stays in the NICU as an infant. He had to stay for three months before he was allowed to come home. Sam Battle, 7, sits in his wheelchair. Sam has little to no mobility on his own and needs the wheelchair and special equipment to move him around and exercise his muscles.

http://lagrangenews.com/wp-content/uploads/sites/37/2015/08/web1_WEB0805Sam041.jpgSam Battle, 7, sits in his wheelchair. Sam has little to no mobility on his own and needs the wheelchair and special equipment to move him around and exercise his muscles.

LaGRANGE — Before Sam Battle was even born, the fight to save his life — and that of his twin brother Charlie — had already begun.

The twin boys shared an amniotic fluid sac with no dividing membrane and suffered from twin-to-twin syndrome.

Their mom, Leslie Battle, went through a high-risk and, at at that time, still-experimental laser therapy to try and save the twins’ lives. It worked, although with some setbacks.

Now 7 years old, the cost of Sam’s health complications have caused the Battles to file numerous insurance claims or dig deep into their own pockets to help their son.

“With a special needs child, it means numerous specialists,” Battle said. “At last count, there are seven specialists we have to see. We have attended the emergency room numerous times … too many to count. We see paramedics out in town that know us by name.”

Sam is nonverbal and his mother said that, like many children with special needs, he also requires unique dietary products for nourishment. The 7 year old has very little to no mobility, so a wheelchair and special equipment is needed to move him around and exercise his muscles.

Battle said the healthcare services and items add up quickly, including the many therapies Sam needs to learn even basic functions such as controlling his muscles and rolling from side to side. At one point the family commuted back and forth to Atlanta for an entire summer to try a brain-based program that would help Sam’s cognitive abilities.

But everything came at a steep price.

“At the same time, this isn’t the only child in the home. You have others too. So the expenses can really add up,” she added.

In addition to the twins, Leslie and her husband, Jeff, have three other children: Chloe, 19, Gavin, 17, and Madelyn, 14.

Specialized schools that have therapy-based programs and are geared towards helping students with learning differences can be expensive or too far away for a child to attend on a daily basis.

“It’s sad to think you have something out there that these children and parents can’t participate in because of money,” said Battle.

Fortunately, a new school aimed at helping children with special needs will officially open its doors to students Friday. The Discovery Cottage at the Lafayette Christian School campus will use brain-based programs such as an Integrated Listening System to help children learn social and cognitive abilities — even just the smallest of tasks such as feeding themselves or tying their shoes.

“The school is developing a strategy best suited for that child and their life skills,” explained Dale Jackson, vice president of the Discovery Cottage fundraising board. “We’re creating a life plan. What do they need to learn to function in our society, or to let us know when something is wrong?”

Jackson is familiar with raising a special needs child and the costs associated with it. His son Colin, 7, is autistic and nonverbal. It was Jackson’s dream to build a school like Discovery Cottage in Troup County. Now Jackson and LCS headmaster John Cipolla hope to make the specialized programs accessible to every child that needs them.

The school has found ways to work with parents to make sure the tuition is affordable, Jackson said.

“LCS has made the commitment to start the school (Discovery Cottage) with the desire to not turn away any parent based on the ability to pay.”

After filling out an application and enrolling at Lafayette Christian School, families can apply for scholarships, which are decided on a variety of factors by an outside finance company and a LCS group called the Tuition Assistance Board. Everything is kept confidential.

LCS will pick up some of the tuition funds, but parents will have to raise the difference by holding several fundraisers throughout the year. Jackson hopes the community will see the potential in the school and help out.

“We’re laying the ground work to help so many children down the road,” Jackson said. “Ultimately, these teachers and this school will help many more children one day.”

For the Battle family, they believe Discovery Cottage holds the key to finally unlocking Sam’s body and mind. They like the brain-based programs — and to them, that is worth every last penny they have.

“We hope to develop Sam’s mobility and the freedom that we know he wants — his vision, his language and the ability to communicate with us,” Battle said. “With Sam, we know it’s all up in his head. He’s been evaluated and cognitively, he’s a smart kid … I’m excited. I can’t wait to see what happens for all these children … the ground breakers.”

The group hopes to raise money for two pairs of specialized headsets for the children before school starts. A GoFundMe website, which may be accessed at www.gofundme.com/7fa23un2hk, is available for anyone wishing to donate.

More information on the school is available at lafayettechristianschool.com/discovery-cottage/ and on Facebook by searching for “Discovery Cottage” and selecting the school on Hamilton Road in LaGrange.

Those wanting to make donations towards Discovery Cottage tuition costs may call Lafayette Christian School at 706-884-6684.