Callaway offense is in good hands 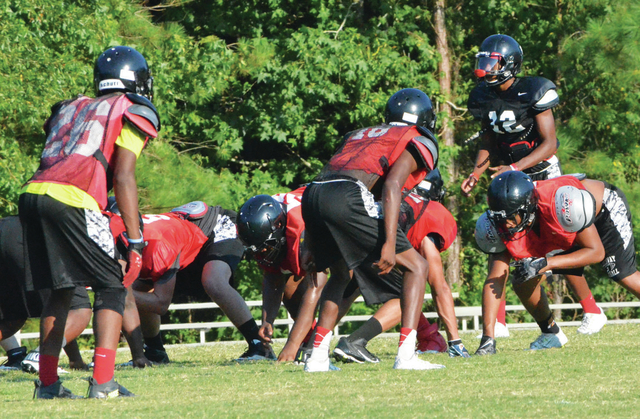 HOGANSVILLE – Callaway’s Braylon Sanders has shown what he can do as a wide receiver.

Sanders has been a dynamic player through his first two seasons of high-school football, and he has already received a scholarship offer from Georgia head coach Mark Richt.

Sanders will now try to excel at another position.

After two seasons as a wide receiver, Sanders will be the one throwing the football this year as Callaway’s starting quarterback.

Sanders has been working closely with offensive coordinator Matt Napier, who has an outstanding track record of coaching successful quarterbacks.

Among the quarterbacks Napier has coached over the years are Quan Bray, Ricky Parks, Tez Parks and Terry Godwin.

While none of those men played quarterback after high school, they excelled at that position while at Callaway.

“It’s been good to us to put the ball in the hands of our best play-maker,” Napier said.

This year, that player happens to be Sanders.

“He brings an athletic ability to the position,” Napier said. “When you have a guy like him, you’ve got to get the ball in his hands.”

Sanders has been working closely with Napier this summer.

Callaway participated in a handful of seven-on-seven tournaments, and he took a lot of snaps during spring practice.

“You don’t just show up (and play quarterback),” Napier said. “He’s meeting with me at 7 in the morning ,we’re going to every seven-on-seven camp. It’s been a lot of reps.”

Two of the men who played quarterback last season, Dre Martin and Dylan Johnson, will be among Sanders’ wide-receiver targets this season.

Martin was Callaway’s starting quarterback for the first five games a year ago, while Johnson started both of the playoff games after an injury to Godwin.

“(Martin has) done really well. He had a really good summer, caught a lot of passes,” Napier said. “Joe Brown is a guy that played some last year, and he’s back. And Dylan Johnson, who has played a little quarterback, he’s playing receiver now. And Devin Brock is a returning guy. We’ve got a few guys that have been out there and played before.”

Callaway’s run game will be in fine shape with the return of Cedric Maynard and Tyreke Frazier, and Sanders will be a major threat on the ground as well.

Napier said the offensive players have been working hard throughout the spring and summer getting familiar with their roles on the team.

“It didn’t start today or last week,” Napier said. “It’s been going on all summer long, and in spring practice. Guys have had time to adjust and get a lot of reps. And then just getting out here and repping every single day you get better. We’ve kind of been doing the same thing for a long time. It’s just getting those guys familiar with it. You’ve got to get them adjusted to that position.”