Cavaliers working hard in the heat 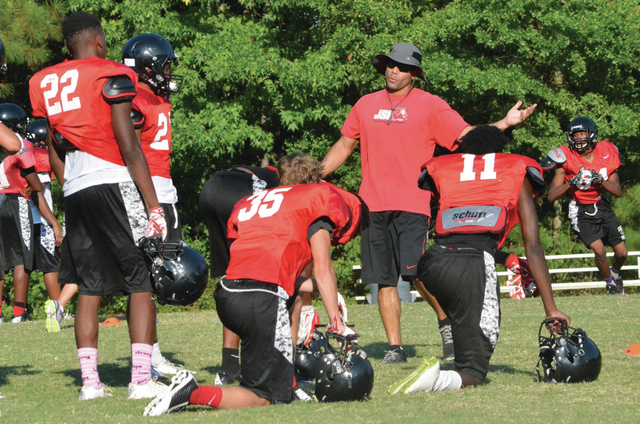 Callaway’s Cedric Maynard looks for running room during Tuesday’s practice session. The Cavaliers are a little more than a week away from their preseason game against Greenville. Kevin Eckleberry | Daily News

http://lagrangenews.com/wp-content/uploads/sites/37/2015/08/web1_8-5-CHS2.jpgCallaway’s Cedric Maynard looks for running room during Tuesday’s practice session. The Cavaliers are a little more than a week away from their preseason game against Greenville. Kevin Eckleberry | Daily News HOGANSVILLE – At the close of an arduous two-hour practice session that was held under the glare of an unforgiving August sun, the Callaway High football players lined up to do sprints.

As the players ran from one side of the practice field to the other, they received shouts of encouragement from the coaches.

Callaway head coach Pete Wiggins knows how important it is to be able to find that something extra on a game night when it’s crunch time, when both teams are trying to fight through to the finish line.

That’s why Wiggins and the other coaches are asking so much of the players right now as a new season marches ever closer.

Callaway is a little more than a week away from its preseason game against Greenville, and it will open the season on Aug. 21 against LaGrange.

“In the fourth quarter, it’ll be 90 degrees, and you have to be prepared for it,” Wiggins said.

Wiggins said the players have done a great job of handling the heat during the first two weeks of preseason practice, and he isn’t the least bit surprised after the effort they put in during the summer.

“We worked all summer,” Wiggins said. “We worked hard trying to prepare for the scrimmage game and the rest of the season. I’m proud of the kids. They’ve worked hard, and we’ve got to keep pushing, and acclimating to the heat.”

The Cavaliers, after completing their five days of conditioning practice, were on the field on Saturday for their first full-contact practice.

Callaway held another full-contact practice on Monday before going with shorts and helmets on Tuesday.

Callaway, along with the rest of the teams in the state, are having to follow the new guidelines put in place by the Georgia High School Association when it comes to preseason practice.

Teams can’t hold full-contact practices more than two days in a row, and they’re limited to 135 minutes of contact each week.

It’s a big change from previous years when there weren’t as many restrictions on how much contact teams could have during the preseason.

“There’s strategy in your practice now,” Wiggins said. “You have to take care of your kids, and I feel like our coaches do a great job of that.”

Callaway’s coaches are taking advantage of every minute they have in practice as they look to get everything in place by the time the season opens.

Offensively, quarterback Braylon Sanders has been getting plenty of reps during practice the past two weeks as he looks to get comfortable running the show.

On the other side of the football, defensive coordinator Dusty Hubbard said “we’re trying to shore up who’s going to play where. We’re trying to figure out where our personnel fits the best. They’re competing. We’ll figure it out.”

Hubbard and the other coaches will get a good look at what the players can do on Friday when the team holds an intra-squad scrimmage.

The Cavaliers will get to face another team for the first time when they play the Greenville Patriots in a preseason game on Aug. 14 in Hogansville.

“The scrimmage will help,” Hubbard said. “We’ll go in there probably with 16 or 17 guys that you’re looking at it, and you have to start 11. We’ll figure it out. It’s nice to have that game. I don’t know what we did when we didn’t have it. It’s a big difference.”

Callaway, which is heading into its 11th season under Wiggins, finished second in Region 5-AAA last season and advanced to the second round of the state playoffs.