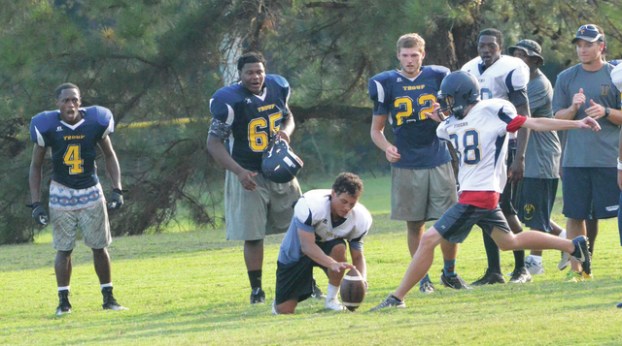 Troup head coach Tanner Glisson talks to the players at the close of practice on Wednesday. Troup will play its first of two preseason games next Thursday. Kevin Eckleberry | Daily News

http://lagrangenews.com/wp-content/uploads/sites/37/2015/08/web1_8-6-troup2.jpgTroup head coach Tanner Glisson talks to the players at the close of practice on Wednesday. Troup will play its first of two preseason games next Thursday. Kevin Eckleberry | Daily News LAGRANGE – One week from today, the Troup Tigers will be at Callaway Stadium, ready to take on another opponent for the first time.

Ready or not, a new football season is almost here.

The Tigers are heading into a new season under the direction of first-year head coach Tanner Glisson, and he’s looking forward to seeing what his players can do next week against Spencer.

“We’ll find out a lot about ourselves come next Thursday,” Glisson said after Wednesday’s two-hour practice session. “We’re ready to get going.”

The Tigers are in the midst of their second full week of preseason practice as they continue to prepare for their season opener on Aug. 28 against LaGrange.

Troup will host Upson-Lee in a second preseason game on Aug. 20 before kicking things off for real the following week against the rival Grangers.

Troup will also have an intra-squad game on Friday at 6 p.m.

Troup will feature an up-tempo offense this season, and Glisson said having referees at Friday’s scrimmage will be beneficial for the players.

“We’ll have referees on Friday,” Glisson said. “That’ll give us a good look at what we’re doing, and kind of be able to see how their pace is going to set the tempo. I don’t know how fast they’re going to spot the ball. We’ll kind of see how that works.”

The Tigers held their first full-contact practice of the preseason on Tuesday, and Glisson said they’ll have the pads back on today.

Like the rest of the teams in the state, Troup is operating under the new guidelines set forth by the Georgia High School Association when it comes to full-contact practice.

Teams can’t have more than two consecutive days of full-contact practice, and they’re limited to 135 minutes of contact per week.

When the regular season comes around, teams can only have 30 minutes of full-contact practice each day, and no more than 90 minutes in a week.

Glisson said the key is to make the most of every minute spent on the practice field, whether the players are wearing the full pads or not.

“We try to get a lot done,” Glisson said. “We mimic our offense in practice, so we try to practice fast. We practice at a high-tempo. We do a lot of coaching to the film, so we give them everything we do. That really saves us some on the field time.”

Glisson said the idea is to make practice as much like a game as possible.

“We think we’re able to simulate some game situations,” Glisson said. “The coaching staff does a good job. Being organized is the main key. If you’re really organized, it goes kind of smooth.”

Glisson said there is still a lot of teaching left to do before the Tigers kick off a new season.

“We’re still in that fundamental stage,” he said. “We’re teaching fundamentals. We haven’t started working on any kind of game plan yet.”

Friday – Troup will have an intra-squad scrimmage at 6 p.m. at the practice field

Aug. 13 – Troup will host a preseason game against Spencer at 7 p.m.

Aug. 20 – Troup will host a preseason game against Upson-Lee at 7 p.m.

Aug. 28 – Troup will play its regular-season opener against LaGrange at 7:30 p.m.